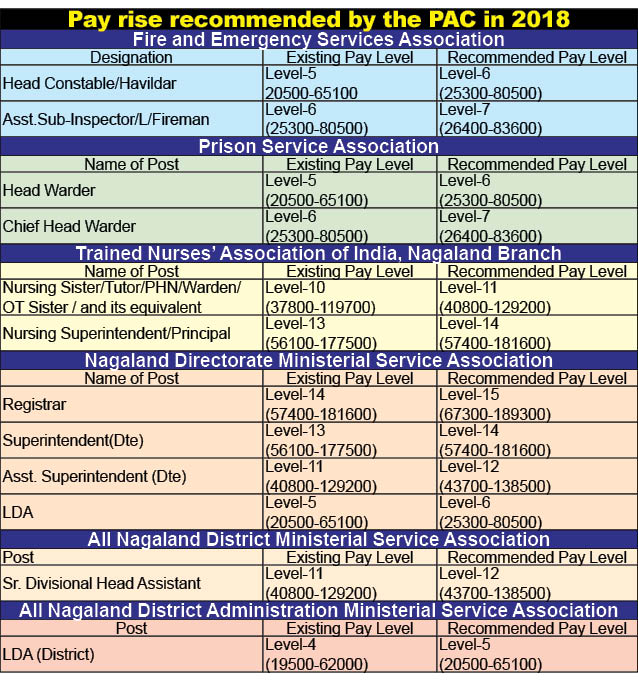 Four service associations to agitate if recommendations are not fully implemented

DIMAPUR, SEPTEMBER 13 (MExN): Four service associations of the Nagaland State Government today cautioned that they may be forced to agitate if the State Government fails to fully implement the recommendations made by the Pay Anomalies Committee (PAC) on Revision of Pay (ROP) for specific categories of employees.

It informed that upon constitution of the PAC by the government in 2018, the four associations had submitted their individual representations to the committee in quest for revision/review of pay structure.

The PAC also took up the grievances of twenty two individuals/departments/associations who submitted representations setting out their claims and contentions. This resulted in the report of the Committee on Pay Anomalies under Nagaland Services (Revision) Rules 2017, which recommended higher level of pay for specific categories of employees’ as of June 1, 2017. (See tables)

The forum however lamented that the government has failed to implement the recommendations without any valid reason even after a lapse of nine months. This, the forum stated, “negates the expertise and wisdom of the committee (and is) discriminatory in nature to the supposed beneficiary departments/associations.”

It meanwhile acknowledged that the government normally constitute a full Pay Commission to look into the grievances and complaints of anomalies from individuals/departments /associations in the ROPs before adopting a new ROP.

“The Government has failed to constitute such ROP Committee and consequently, the aggrieved individuals/departments/associations were not given opportunity to be heard in principle of natural justice. Denying the right to enjoy appropriate fixation of salary commensurating to the post as recommended by the PAC is discriminatory,” the forum however said.

It meanwhile stated that if the present PAC is not to be considered the competent authority to redress such grievances and anomalies, then a full ROP committee should be re-constituted for addressing the issue at hand.

The forum pointed out that as per the PAC, “The Nagaland Services (ROP) Rules 2017 is based on the recommendations of a Pay Fitment Committee with inherent anomalous situations which were carried over from the earlier pay revision. There is a need for some rationalization of pay scales in certain areas. The Committee, therefore, in its recommendations, has tried to address this aspect as far as possible, within the limited scope available to it.”