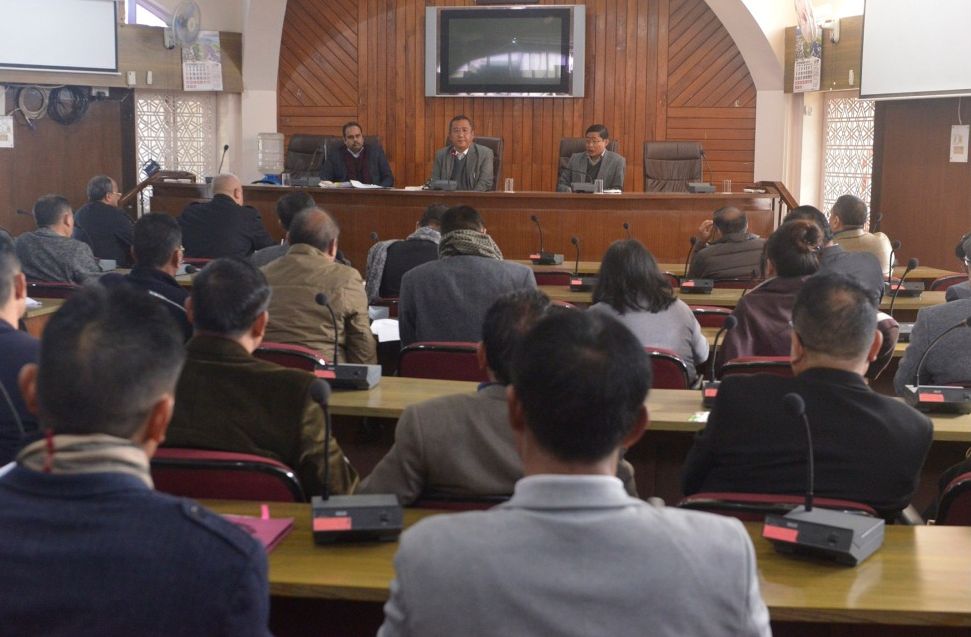 Says serious about
‘No work, No pay’ rule

As many government officers and staff continued to be absent from work even after two weeks of the resumption of offices, Nagaland Chief Secretary Temjen Toy today directed all the departments to strictly implement ‘No Work, No Pay’ against the erring employees.

Speaking at the first AHoDs and HoDs meeting here for the year 2020, the Chief Secretary expressed disappointment over the practices and reportedly noted that most government servants were serving for their own interests forgetting their priorities as government employees.

According to reliable sources, he further pointed out to the senior officers that it is their responsibilities and unless they discipline themselves, they cannot expect their subordinates to be regular and punctual.

"Attending office seems to have become an option,” and with this kind of lackadaisical attitude how can we serve our people,” he questioned, concerned with the dereliction of duties by many senior officers.

To this end, Toy directed for strict maintenance of casual leave account in all offices, starting from the Secretariat to the district and sub divisional offices.

"Unless we become amenable to rules, there is no future. Government servants think we are on a higher pedestal and that we are above shouldering responsibilities which have actually been entrusted on us,” he asserted.

Further lashing out at the officers, Toy questioned whether the senior officers have any moral authority to impose discipline on subordinate officers and staff, when they themselves were setting bad examples.

Under the present circumstances, he said, it was embarrassing to even call oneself a public servant.

'Scant regard' for public property

At the same time, the Chief Secretary has also candidly pointed on the pathetic maintenance of public properties in the government offices, particularly the toilets, which he said indicated ‘scant regard’ for public property.

While government servants are expected to uphold the rule of law, he said, this was sadly, visibly absent among majority of the government employees.

Even as he apologized for the harsh words, he maintained that whatever he said were not his views but the harsh reality that existed within the Government.

Earlier on January 4, the Chief Secretary expressed dismay over the poor attendance of government employees and has warned of strict action against those absentees. He reiterated the same today.

Later talking to The Morung Express, Toy said the government is very serious towards the implementation of ‘No Work, No Pay’ rule for erring employees stating that as government servant one should be sincere in one’s duty towards serving the people.

Meanwhile, a visitor to government office encountering empty offices for past few days expressed frustration that while many days have lapsed after a spell of holiday (including both official and unofficial leave), most  government servants availing the same went unchecked.

With many urgent works pending, he said he had been to various offices for some day at a stretch however, the attendance in almost all the offices are still very poor, and no works could be processed.

“In such a scenario, it is really frustrating to see many of our precious days being wasted because of people who are being handsomely paid by our government,” he said expressing frustration over loss of precious times.

“I hope the government takes punitive action on its irresponsible employees so that it serves as a deterrent in future and some semblance of work culture can be restored among the people who are being ‘overly paid for their minimum jobs',” he added.