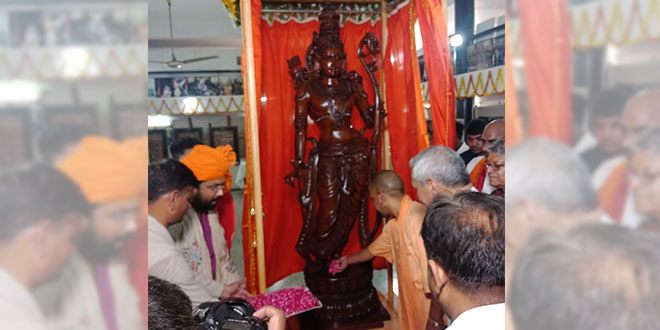 Ayodhya, August 12 (IANS) The installation of the tallest statue of Lord Ram in Ayodhya seems to have run into rough weather with strong resentment brewing over acquisition of land for the project.

The land for the project is to be acquired in Mirpur area, near the highway bridge on the banks of the Saryu river. The proposed land area includes five temples, 22 land holdings, 517 trees and 165 houses.

Nearly 85 per cent of those affected by the project have refused the move to acquire their properties. This protest has already delayed the project.

According to the president of the Saryu Colony resident association in Mirpur, Deveshacharya, "The government should acquire land on the highway instead of disturbing people who have been living here for years. In case, some houses have to be acquired, we should be rehabilitated at a distance from the project."

The dispute has already reached the High Court, he said.

The Ram statue project will be spread over 100 acres on the banks of the Saryu. The statue itself will be 251 metres tall and will be positioned on a 50 metre tall stand. This will be the world's tallest statue.

At the base of the statue, there will be a Ram museum that will showcase all the 'avatars' of Lord Vishnu. This digital museum will also have a food plaza, library, a picture gallery and landscaping.

The state tourism department has already issued two notifications for land acquisition. The first notification was cancelled due to technical flaws.

This is Yogi Adityanath's most ambitious project and the Chief Minister is taking personal interest in it. He had visited Ayodhya on August 3 to review the progress of development work in the holy city.