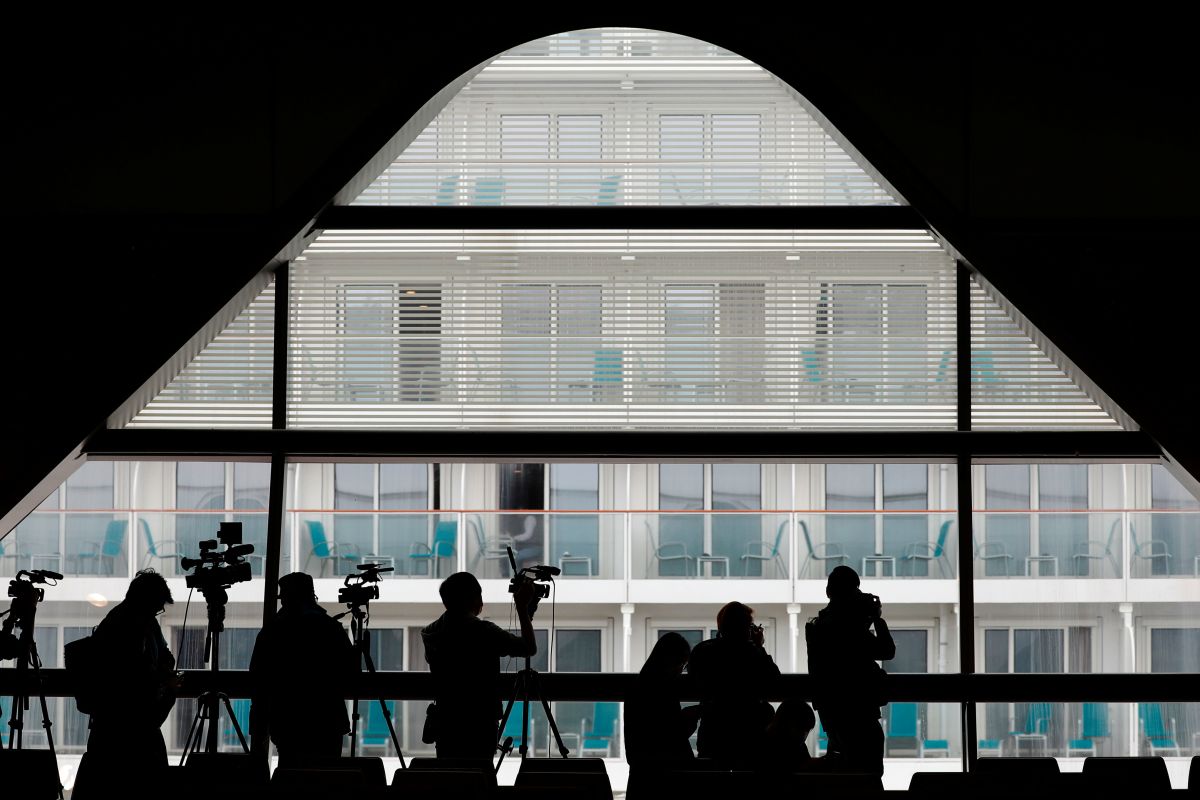 Media work in front of the World Dream cruise ship, after it had been denied entry in Taiwan amid concerns of coronavirus infection on board, at the Kai Tak Cruise Terminal in Hong Kong, China February 6, 2020. REUTERS/Tyrone Siu

SHANGHAI/BEIJING, February 7 (Reuters) - A Chinese doctor who tried to warn the world about a new coronavirus died of the disease on Friday, prompting an outpouring of sorrow as the death toll passed 630 and Beijing declared a "people's war" on the rapidly spreading pathogen.

Li Wenliang, 34, died in the early hours of the morning at the hospital where he worked and first raised the alarm about the new coronavirus in the central Chinese city of Wuhan, the epicentre of the outbreak, hospital officials said.

An ophthalmologist, Li was one of eight people reprimanded by Wuhan police last month for spreading "illegal and false" information about the coronavirus, a flu-like pathogen that since triggered a global health emergency.

His messages to a group of doctors on Chinese social media warning of a new "SARS-like" coronavirus - a reference to Severe Acute Respiratory Syndrome (SARS) which killed almost 800 people around the world in 2002-2003 - triggered the wrath of Wuhan police. China was accused of trying to cover up SARS.

He was forced to sign a letter on Jan. 3 saying he had "severely disrupted social order" and was threatened with criminal charges.

Chinese President Xi Jinping had earlier sought to reassure his citizens and the world that China would beat the coronavirus.

Many Chinese people on social media described Li as a hero and a tragic figure, charging local authorities with incompetence in the early stages of the outbreak which has now claimed more than 400 lives in Wuhan and forced the city into lockdown.

"We deeply mourn the death of Wuhan doctor Li Wenliang ... After all-effort rescue, Li passed away on 2:58 am, Feb. 7," the ruling Communist Party's People's Daily tweeted.

Some Chinese media outlets described him as a "hero who was willing to speak the truth" while other commentators posted poems, photos and drawings saluting him.

"Light a candle and pay tribute to the hero," one person posted on social media platform Weibo. "You were the beam of light in the night."

The death toll from a coronavirus outbreak in mainland China reached 636 on Friday with 73 more deaths recorded the previous day and 3,143 new confirmed infections, bringing the total so far to 31,161 cases, the National Health Commission said.

Two deaths have been reported outside China, in Hong Kong and the Philippines, but uncertainty about the lethality and contagiousness of the virus has prompted countries to quarantine hundreds of people and cut travel to and from China.

The virus continued to spread around the world, with 41 new cases reported among about 3,700 people quarantined in a cruise ship moored off Japan, bringing the total to 61 cases onboard.

In Hong Kong, another cruise ship with 3,600 passengers and crew was quarantined for a third day with three cases on board. Taiwan, which has 13 cases, banned international cruise ships from docking.

In China, the world's second-largest economy, cities have been shut off, flights cancelled and factories closed, cutting off supply lines crucial to international businesses.

Anxiety over the virus and its fallout returned to financial markets on Friday, with stock indexes in China, Hong Kong and throughout Asia slipping after several days of gains. Investors are looking to Chinese trade figures due during the morning for an early glimpse of how the virus, and the harsh measures to contain it, are affecting the flow of goods.

The World Health Organization (WHO) said it was too early to say the outbreak was peaking.

One Chinese official said the crisis could be nearing its peak, with just over 1,300 patients discharged from hospitals, although the number of new patients diagnosed with coronavirus was still rising.

"I have full confidence that we're going to get ahead of it," the official said. "The biggest challenge is still to control the spread of the disease, and let all the suspected patients be cured in the hospital."