Crop rotation is one of the oldest and most effective cultural control strategies. It means the planned order of specific crops planted on the same field. It also means that the succeeding crop belongs to a different family than the previous one. The planned rotation may vary from 2 or 3 year or longer period.

The aim of rotation is threefold: to balance nutrient demands, foil insect and disease attacks, and deter weeds.

Stubble or soil-borne diseases, such as sclerotinia and virulent blackleg, are reduced when two or three years of non-host crops are planted and host weeds are controlled. Leaf and stem diseases of cereals are also reduced by rotating host crops. Rotations do not affect air-borne diseases as much.

Some diseases, such as root rot, may decrease under direct seeding due to improved soil structure and soil health. Other diseases may increase under the moister and cooler conditions in direct seeded fields. However, crop yield increases due to the extra soil moisture can sometimes offset losses due to these diseases, and rotations can help to control the diseases.

Weeds such as Canada thistle can be reduced in perennial forage crops cut for hay or silage. Dandelions may increase in forage stands if the stand is thin. Wild oats are often reduced after a forage stand has existed for several years and are reduced even more when an annual crop is direct seeded into forage stubble, since the soil has not been disturbed much for seeding

Crop rotations allow herbicides from different herbicide groups to be used for weed control, reducing the risk of herbicide resistance and allowing problem weeds to be controlled.

Many insects are mobile and can invade fields from the edges. Rotations reduce the impact of insect pests that are less mobile. Rotations may also reduce insecticide costs if you can spray the field edges to control invading insect pests.

Both legume forage and pulse crops can increase the amount of nitrogen available for subsequent crops. In the case of forage legumes, the additional nitrogen can last for more than one year. When grass forage stubble is seeded to an annual crop, nitrogen applications may be required until the forage residue decomposes enough to release nutrients for plant growth.

Residue impacts from different crops are not greatly different, but some effects should be noted

.
Low residue crops, like annual silage crops, canola or flax, in a rotation may be beneficial in wetter, cooler conditions. The lower residue levels may allow the soil to warm up sooner next spring, permitting earlier seeding of a longer season crop.

Higher residue levels increase moisture conservation, which can be very useful for shallow seeded crops. To get uniform germination, the crop residue must be spread evenly behind the combine.

Crop rotations that include pulse crops and legumes will reduce energy consumption in a major way since they do not require nitrogen fertilizers while they are growing and often add nitrogen to the soil for succeeding crops. With the increased costs of energy and of fertilizers of all types, reducing fertilizer requirements is a very significant aspect of crop rotations.

Growing perennial crops in rotations also reduces energy consumption due to fewer seeding requirements for perennials compared to annual crops. Both pulse crops and legumes within rotations will improve and reduce the carbon footprint and the energy footprint of various crops.

Crop rotations also improve the biodiversity of a farm by providing diverse habitats for various birds and other species that live on the farm.

•    Know the family where your crops belong, to make sure that you plant on the next cropping a crop that belongs to a different family than the previous one

•    Make a list of the crops you want to grow but also take into consideration the market's demand of your produce. For example, plant leafy vegetable on the first cropping season, next fruit vegetables, then root crops, then legumes, then small grains

•    Grow legumes before grains or cereals

Some of the important crops with their family 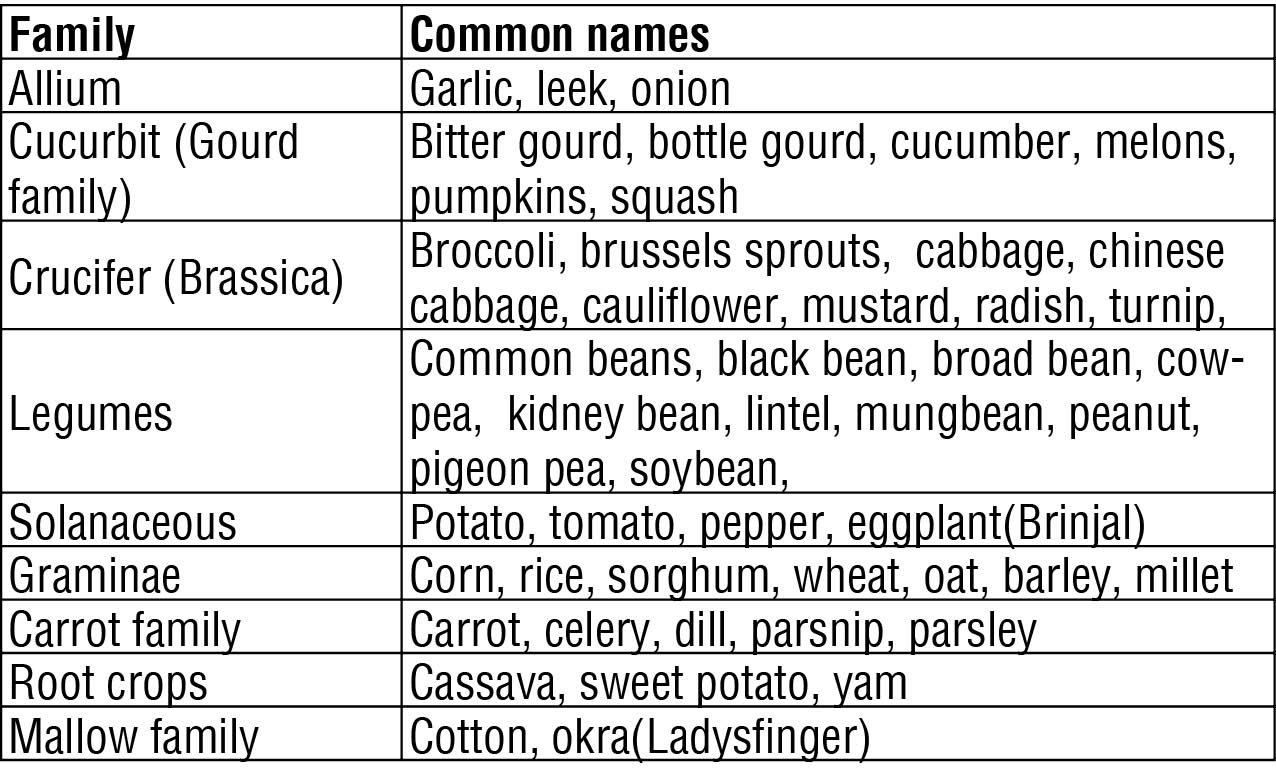