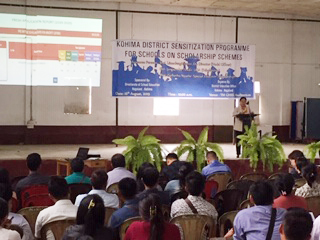 Kohima, August 18 (MExN): The District Education Office(DEO), Kohima organised a programme on Sensitization of Scholarship Scheme for all the Schools under Kohima District and Pughuboto Division at TM GHSS Auditorium, Kohima on August 16.

The release stated that the concern authority mentioned that “it is the ignorance and not wanting to take extra trouble during the past years, that nothing much could be done for the students in regard to scholarships but one must understand that scholarship is an excellent source of motivation where the children felt valued and included.” “It also reduces the rate of drop outs,” it added. It further stated that the target is to achieve 100% coverage to all eligible children placed in their care.