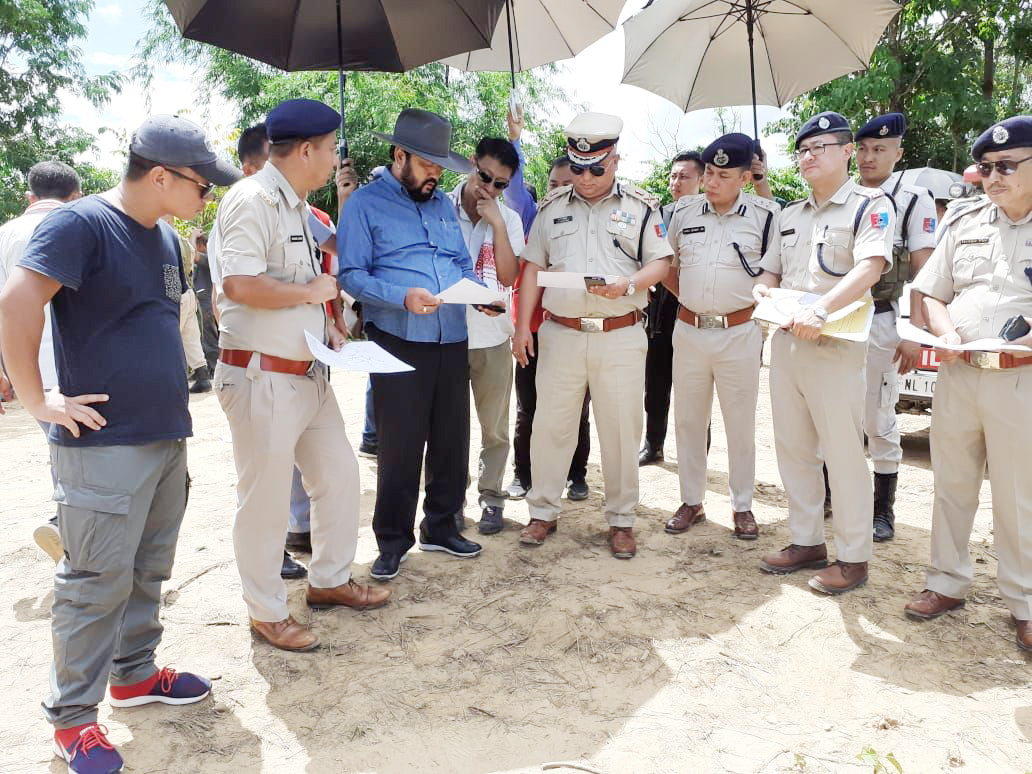 Deputy Chief Minister, Y Patton with police officials at the site of the September 6 violent incident along the Dimapur-Peren boundary.

DIMAPUR, SEPTEMBER 10 (MExN): Nagaland State Deputy Chief Minister, Y Patton, who is also the Home Minister, paid a visit to the site of the recent imbroglio between Lamhai and Kiyevi B/ Khehoi villages under Peren district, wherein burning of houses and firing took place on September 6.

A press release from the Deputy CM’s media cell informed that Patton met with the district administration, police officers and civil societies, who apprised him of the current situation as being “relatively peaceful after the state Chief Secretary issued orders for maintaining status quo.”

Patton lamented that during the creation of Peren district, proper demarcation was not made, as a result of which, half of the disputed area lies in Dimapur district and the other half in Peren district which has made the matter more complicated.

Patton informed that for this particular issue, a Cabinet Sub Committee has been constituted, which will meet on September 12. The Deputy CM said he would advise the committee to visit the areas for detailed information. He meanwhile appealed to the stakeholders to maintain status quo till the matter is properly examined and resolved.

Nagaland DGP, TJ Longkumer also appealed to all the parties to maintain harmony to ensure that there is no loss of life and cautioned against anyone taking the law into their own hands. He directed the police officers to report any kind of disturbances and provocations, for which action will be taken against perpetrators.

Deputy Commissioner of Peren, Sentiwapang Aier meanwhile informed that developmental activities including road construction in the disputed areas has been ceased. He however, said that due to claims and counter claims from both parties, they could not come to a clear and logical conclusion. The Superintendent of Police, Peren added that a reserved police force has been stationed at all strategic locations. He however noted that additional forces may be required at the disputed site so that there is no further escalation of the issue.

The Deputy CM was accompanied by the DIG (R); Commissioner of Police, Dimapur; CO, 11 IR, officers from district administration and police officers of Peren district.