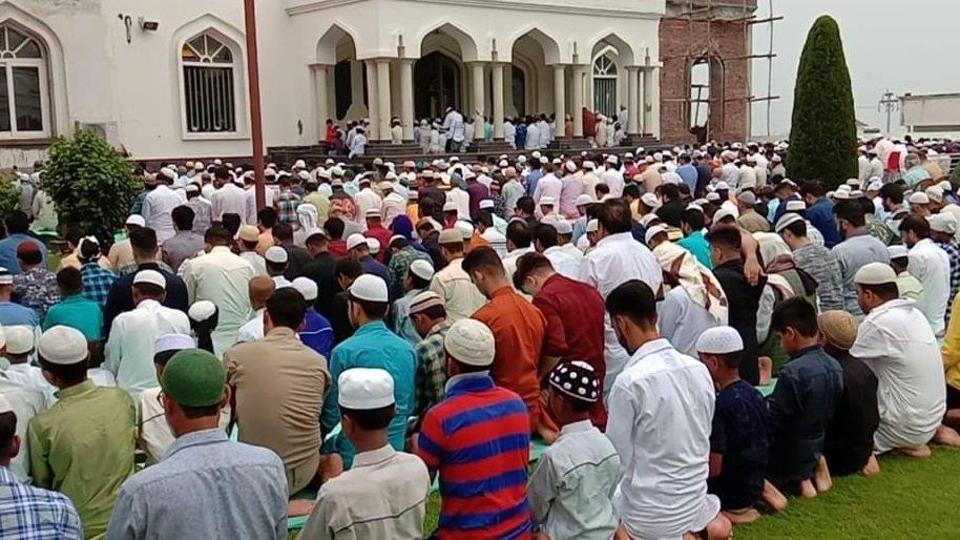 People offered namaz in the morning at Mohalla mosques in various parts of Srinagar. (ANI Photo )

Srinagar, August 12 (IANS) Amid massive security arrangements and restrictions, Eid prayers concluded peacefully in all parts of Jammu & Kashmir on Monday, after the revocation of Article 370 that granted the state a special status.

The prayers began at 7 a.m. and continued till noon in some places. The movement of people was facilitated by the police. People offered namaz and were also seen greeting police personnel on duty.

There were large congregations in mosques in Bandipora, Baramulla, Kupwara, Trehgam, Sopore, Kulgam, Shopian, Pulwama, Awantipora, Anantnag, Ganderbal and Budgam. In Jammu, over 5,000 people prayed at Eidgah, while in Baramulla around 10,000 people offered namaz at the Jamia Masjid.

In Srinagar, prayers were offered in hundreds of local mosques, after large congregations were restricted in sensitive areas.

There were some isolated incidents of stone pelting and minor protests in a few places. A few people also received minor injuries in the police action that followed.

In a bid to facilitate Eid celebrations, the state administration had started easing the restrictions from Saturday onwards in a calibrated manner. On Sunday, people thronged the shops that opened during the six hours of curfew relaxation.

There was a massive sale of goats and sheep in Srinagar and other parts of the valley. Over 2.5 lakh sheep were sold in Srinagar by Sunday, before the restrictions were back.

A meeting was also held on Sunday between clerics and the Kashmir Divisional Commissioner Baseer Khan, Inspector General of Police (Kashmir) Swayam Prakash Pani and Srinagar District Magistrate Shahid Choudhary to ensure a peaceful and smooth celebration of Eid.

Restrictions were completely lifted and limited to night in five districts of Jammu.

Officials said more than 250 ATMs have been made functional in Srinagar and bank branches were also open.

But the restrictions on connectivity continue. Though people are being facilitated to contact their relatives outside the state through widespread deployment of helplines at convenient locations such as the District Commissioner's office, police stations and police posts.

Over 300 public points for phone connectivity have also been functional across the Kashmir division. Thousands of calls are being made every day from these places. Over 5,000 calls were made in one day in Srinagar.

In the absence of communications services, the media is being facilitated through a media center set up with phone and internet connectivity. Daily briefings are held by a senior government official there at 11 a.m. and 6 p.m.

Jammu and Kashmir has been under lockdown since the government on August 5 abrogated Article 370, and divided the state into two Union Territories.