'Fake narrative from epicentre of terror': India slams Pak at UN on Kashmir 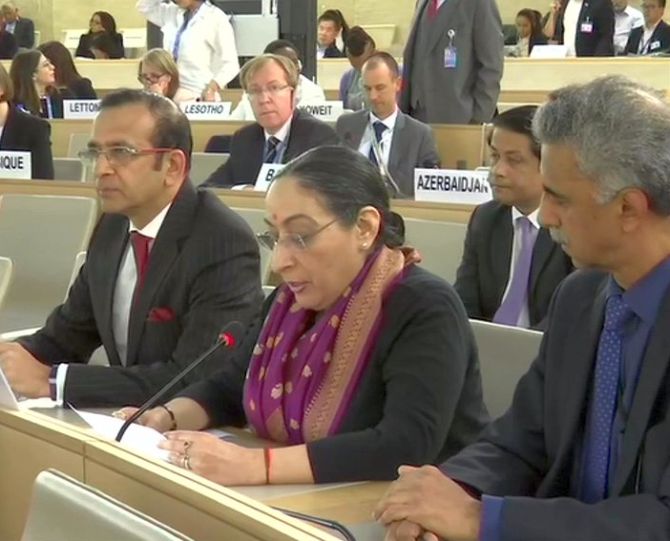 Indian delegation at the UNHRC meet in Geneva. Photograph: ANI

New Delhi, September 10 (PTI): Revocation of Jammu and Kashmir's special status was a sovereign decision taken by the Indian Parliament and the country cannot accept any interference in its internal affairs, India on Tuesday asserted at the United Nations Human Rights Council, while strongly rejecting Pakistan's "malicious" campaign on the issue.

“One delegation here has given a running commentary with offensive rhetoric of false allegations and concocted charges against my country. The world is aware that this fabricated narrative comes from the epicentre of global terrorism where ring leaders are sheltered for years,” Vijay Thakur Singh, secretary (east) in the foreign ministry told the UN body.

“This country conducts cross border terrorism as form of alternate diplomacy,” she added, without once naming Pakistan in her brief but biting response where she first spoke about parliament’s decision to amend the law on Jammu and Kashmir in televised proceedings.

Singh said there was a need to call out those who are misusing the UNHRC for malicious political agenda under the garb of human rights.

"They cry victim when they actually are the perpetrators," she said, rejected Pakistan's charges against India on the issue at the 42nd session of the UNHRC.

She said the recent legislative measures taken by India in Jammu and Kashmir were within the framework of its Constitution.

"These decisions were taken by our Parliament after a full debate that was televised and enjoyed widespread support. We wish to reiterate that this sovereign decision, like other legislations passed by Parliament, is entirely internal to India. No country can accept interference in its internal affairs, certainly not India," Singh said.

Earlier, Pakistan demanded an international investigation by the UN Human Rights Council into the situation in Kashmir and urged the world rights body not to remain "indifferent" after India revoked Jammu and Kashmir's special status.

Addressing the session, foreign minister Shah Mahmood Qureshi, leading the Pakistani delegation, said the top UN rights body should not be embarrassed on the world stage by its inaction over the issue.

He said the UNHRC must not remain indifferent to the situation in Kashmir after India revoked the special status of Jammu and Kashmir on August 5.

"Today, I have knocked on the doors of the Human Rights Council, the repository of the world's conscience on human rights, to seek justice and respect for the people of Kashmir," he said.

Qureshi asked the council to urge India to immediately stop the use of pellet guns, lift the curfew, reverse the clampdown and communications blackout, restore fundamental freedoms and liberties, release political prisoners and fulfil obligations under the UN Security Council Resolutions and various human rights instruments, as required by international law.

He asked the council to constitute a commission of inquiry into the situation in Kashmir, as recommended by the Office of the UN High Commissioner for Human Rights.

"We must not allow this august body to be embarrassed on the world stage. As a founding member of this council, Pakistan feels morally and ethically bound to prevent this from occurring," he said, adding that in order to do so the body should not remain indifferent to the situation that was unfolding.

"We must act decisively and with conviction," Dawn newspaper quoted Qureshi as saying.

India last month abrogated the provisions of Article 370 in Jammu and Kashmir, and bifurcated it into two Union Territories.

Qureshi said that the Kashmiri people were denied the "basic and inalienable human rights".

He said the basic amenities and means of communication were not accessible to the people of Kashmir.

He claimed that shops and hospitals in the region were running out of supplies and the political leadership of Kashmir had been placed under house arrest or imprisoned.

The Pakistani mimnister said that with its actions India was breaching multiple international human rights instruments that it was a party to.

He reiterated that India's unilateral decision to revoke Article 370 on August 5 was illegal under international law.

His statement came a day after UN human rights chief Michelle Bachelet expressed "deep concern" over the impact of restrictions in Kashmir, and asked India to ease the current lockdowns to ensure people's access to basic services.