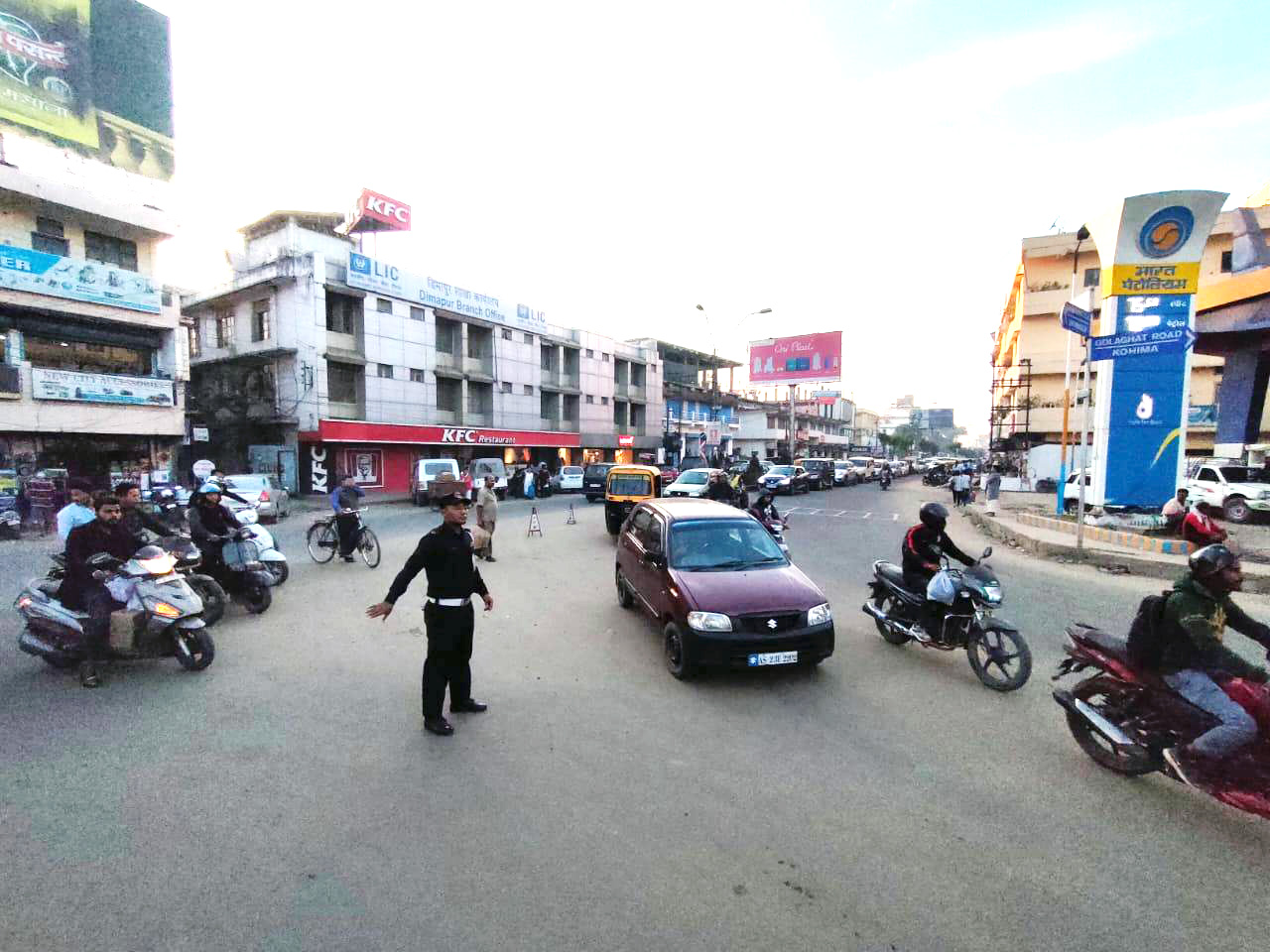 It is the festive season again and the state’s commercial district is no stranger to the unceasing traffic jam and snarls, which remain a nightmare to both motorists and traffic personnel.

With thousands of vehicles of all hues plying the narrow streets and thoroughfares of Dimapur city, Dimapur Traffic Police (DTP) officers and personnel are on overdrive to streamline traffic flow and ensure safety of both motorists and pedestrians.

Every festive season, there is an abnormal increase in number of vehicles as well as people thronging the streets and shopping centres of the commercial hub: besides the reported 80,000 plus Dimapur district registered vehicles, hundreds of vehicles from neighbouring states and other districts of the state enter Dimapur daily, ferrying passengers who come for Christmas shopping or visitations.

In an interaction with The Morung Express, officers of DTP Zone-I, which looks after the nerve centres of the city, shared some of the initiatives of DTP to streamline traffic, safety measures and responsibilities of motorists and vehicles owners.

It’s a 12-hr daily duty
All officers and personnel of DTP Zone –I, are on active duty from 8 am to 8 pm everyday during this festive season, to regulate traffic and oversee road safety measures, informed Assistant commissioner of Police, DTP Zone-I, R Randanbemo Ezung.

The ACP said traffic officers and personnel are communicating on non-stop basis through radio sets to streamline traffic flow in major intersections.

Besides the road safety tips put up by DTP at major traffic points, Ezung also said traffic personnel are conducting breathalyzer test regularly on drivers, especially in the evening and nighttime, to check drunken driving, one of the main cause of road accidents.

Officer incharge, DTP Zone-I, G Tungnung, said despite the best efforts of DTP, the motorists and vehicle owners have a big role to play to ease traffic snarls–follow the rule of the road.

Traffic etiquette vital
Both the ACP and OC concurred that the main cause of “traffic jam is lack of traffic etiquette and impatience on the part of motorists and vehicle owners.”

“Take the case of Nyamo Lotha Road, if drivers and vehicle owners can park their vehicles responsibly and make judicious use of space, then traffic flow will be eased to a great extent”, Ezung said.

Despite instructions and appeals from DTP to follow and obey traffic rules, overtaking from the wrong side, breaking the line and random parking continue to rule the road. Autorickshaws taking abrupt u-turns in the streets and breaking the vehicle line have compounded traffic woes.

“It is also a common sight to see passengers boarding or alighting from autos in near middle of the road or at busy traffic points, completely discarding traffic etiquette,” a traffic personnel said.

The festive season which is also the wedding season in Nagaland, has also contributed to the traffic chaos in Dimapur.
“Recently, a couple of weddings took place simultaneously on the same day in different churches located within the main city. That time, traffic came to almost a grinding halt the entire day. The main cause was random parking of vehicles on roadsides by wedding attendees,” another traffic personnel said.

Adding human touch
But in this festive season the DTP personnel have to add a human touch too.

“Besides manning traffic, we have an added responsibility to assist shoppers, especially elderly citizens, women and children to cross the road at busy intersections”, said 2nd OC, DTP Zone –I, Temsulemba.

In Dimapur, the highest rate of accidents reportedly occurs between Christmas and New Year eves. Asked what message the DTP would like to convey to minimize loss of lives during this time, one traffic officer said, “Simple, don’t drive under the influence (DUI) of alcohol and refrain from using your mobile phone while driving.”

Despite DTP ‘road safety tips’ billboards at strategic points, with messages like “Bokato wears seatbelt, “Nchum does not use phone while driving,” “Wangba uses dipper” and “Asen wears a helmet,” many motorists and drivers choose not to “be smart” and continue to flout traffic rules.

In a city where everyone seems to be in a tearing hurry, ever ready to flout traffic rules and at the same time complaining about other drivers and traffic policing system, the message of DTP “You own a car, not the road, obey Traffic rules” might serve as a fit reminder.