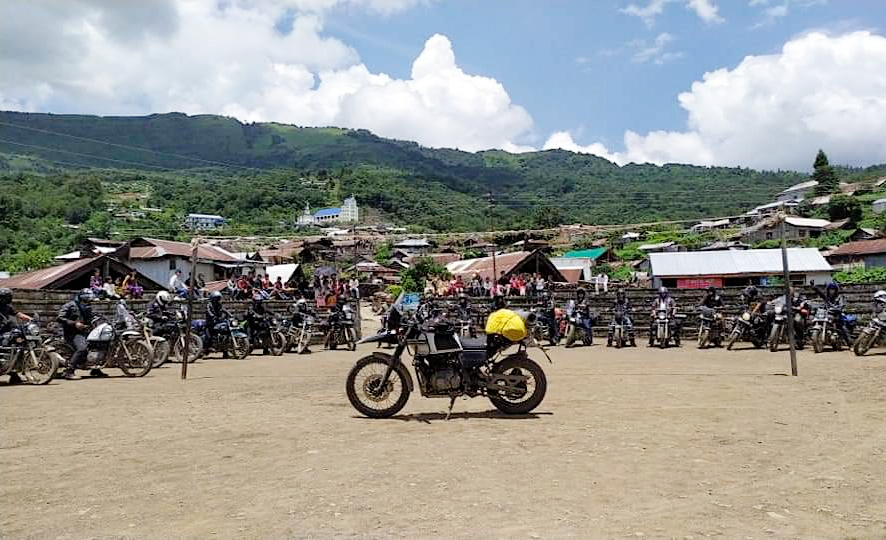 Kohima, August 14 (MExN):  Nestled below Mt Kapamodzü, the 4th highest peak in Nagaland standing at 2620 meters, scenic Zhavame village offers an adrenaline rush for the adventurous as well as eclectic offering for foodies.

Known for various varieties of organic vegetables, particularly cabbages, which are produced on a commercial scale, the village is also blessed with fruits of multiple varieties, including seasonal apples.

Located just 14 kilometers from Pfütsero and reachable via Tadubi town in Senapati district of Manipur, the village is also ideal for trekking, rock climbing, para-gliding, downhill cycling, extreme motorsports and other activities related to rural tourism.

Given the various escapades it offers, the place was chosen as the destination of 2019 Nagaland Motorcycle Club (NMC) Kohima Chapter annual ride on August 10 and 11.

19 ‘Naga Chiefs’ and 3 pre-inductees camped overnight at the scenic village in a thatched traditional house built for accommodating tourist. This was informed Peter Rütsa, NMC member (‘Naga Chief’), who religiously embarks on the ride every year.

The NMC consider “itself pioneers in promoting rural adventure tourism across the state of Nagaland and other parts of Naga inhabited areas” occasionally with the support of the state government agencies alongside its sister club Nagaland Adventure Club (NAC) on numerous tours.

The villagers most willingly hosted the group of “eager, disciplined and adventurous 'Naga Chiefs,” Rütsa said. He stressed that the place “is a perfect destination for people looking for a getaway from urban activities without much hassle for short durations.”

“The frozen roads in winter are a challenge for vehicles and a thrilling climb up the steep, narrow cliff hanging rocky road to Kapamodzü are a must try,” he added.

The NMC member further noted that the “beautiful ruggedness” of the area is most enjoyable with weekend visits and overnight halts at the village during spring and when Kapamodzü is in full bloom with wild flowers in winter or when its summit turns white with snow and frost is captivating.

With abundant camping sites and clear natural streams, wild edible plants and locally reared delicacies are plentiful for those who are not just adventures in spirit but also relish what comes out of the cooking pot, he affirmed.

“The rice beer of the village is second to none, partly because it is not commercially produced!”

For motor adventure, the NMA informed that it advisable for visitors to use SUVs, preferably 4x4s or motorcycles that perform well off-tarmac roads for mobility, satisfaction and safety.

To the more adventurous, it advises camping on top of mount Kapamodzü in winter when the temperature “dips minus 15°” and is ideal “for star gazing, watching clear celestial sky and to view the sun rising over the Saramati Mountain.”

Nagaland has tremendous potential for rural, adventure, cultural, eco, agri, culinary tourism besides others, Rütsa informed. He further noted that with an adequate level of support from the government and active participation of village communities, rural tourism can empower the local populace and villages in a big way.