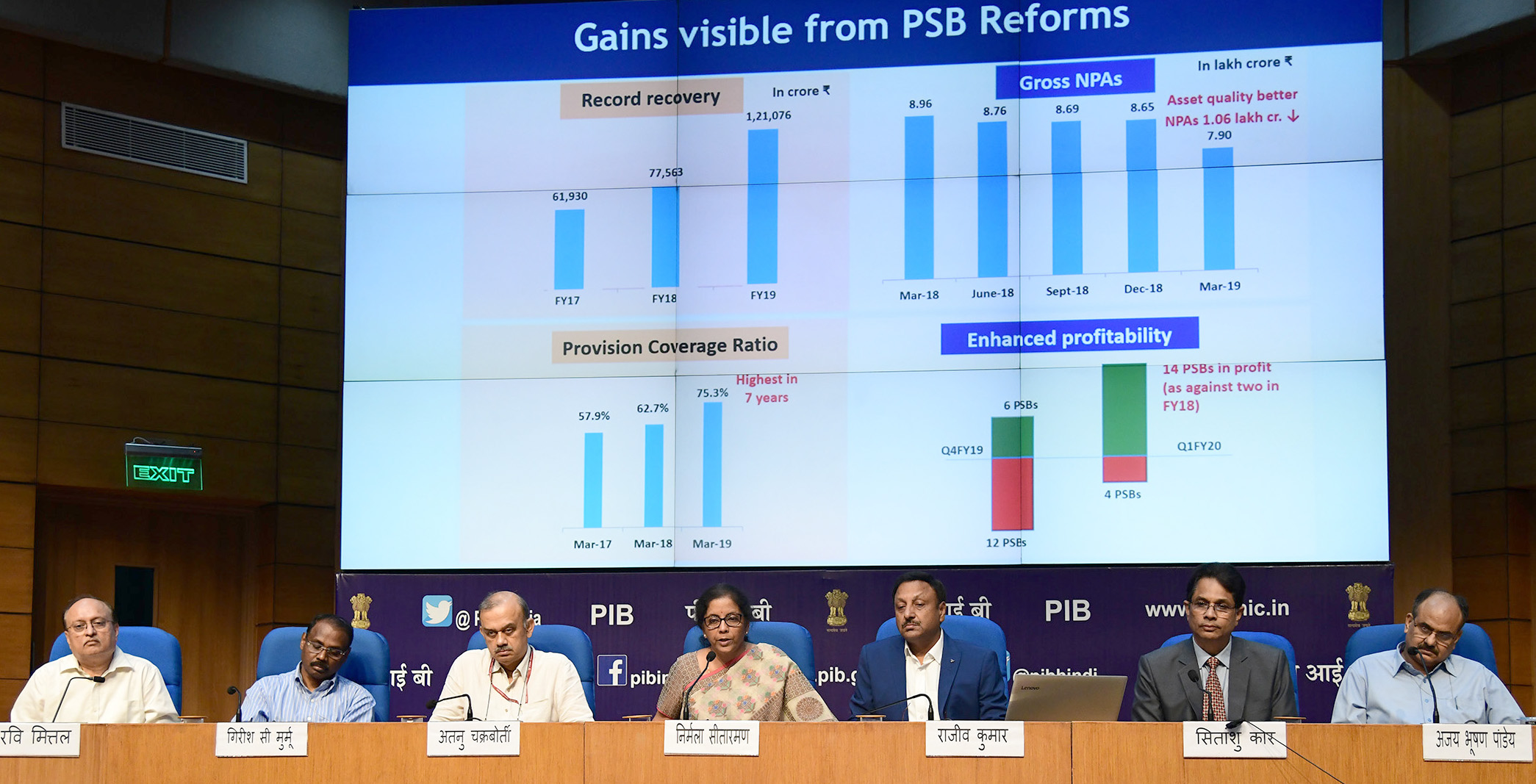 New Delhi, August 30 (IANS) The government on Friday announced the mega-merger of 10 PSU banks into four, where the Punjab National Bank, the Oriental Bank of Commerce and the United Bank to merge become the second-largest PSB while the Canara Bank and the Syndicate Bank will amalgamate to make the fourth-largest PSU bank entity.

Also in the series of mergers announced by Finance Minister Nirmala Sitharaman at a briefing here, the Union Bank, the Corporation Bank, and the Andhra Bank will be merged to become the fifth-largest PSU bank and the Indian Bank and the Allahabad Bank merge to be the seventh-largest.

"The mergers would help in better management of capital," she said, while announcing the merger proposal as a part of a package of reforms for the economy.

She also announced a series of governance reforms for government banks in the hope that the capital infused by the government into the lenders would result in "stronger banks".

In deciding on the combinations for final mergers, the government has picked some of the larger and relatively stronger banks to be the "acquirer banks".

The Punjab National Bank will see itself take over the Oriental Bank of Commerce and the Kolkata-based United Bank of India. This will form India's second largest public sector bank, after the State Bank of India, with Rs 18 lakh crore business and the second-largest branch network.

The combined business of all three banks is 1.5 times higher than the PNB's existing business, said Sitharaman.

The merger comes at a time when the PNB is just about recovering from the near $2 billion Nirav Modi fraud and has a high level of non-performing assets. Its gross NPA ratio stood at 16.5 percent as of June 2019. The bank reported a capital adequacy ratio of 9.77 percent at the end of the first quarter.

The Canara Bank will take over the Syndicate Bank to form the fourth-largest public sector bank with Rs 15.2 lakh crore business and the third largest branch network in India. The combined advances base of the merged bank will be Rs 6.61 lakh crore and the deposit base will stand at approximately Rs 8.6 lakh crore.

The Canara Bank had a relatively lower gross NPA ratio of 8.77 percent ahead of the merger, while its capital adequacy ratio, as on June 30, was at 11.7 percent.

The Union Bank of India will take over the Andhra Bank and the Corporation Bank to become the fifth-largest public sector bank. The combined advances base of the new bank will be Rs 6.39 lakh crore and the deposit base will stand at Rs 8.2 lakh crore. Union Bank too has a high gross NPA ratio of 15.18 per cent and its capital adequacy ratio at the end of the first quarter stood at 11.43 per cent

The Indian Bank will merge with the Allahabad Bank to become the seventh-largest with Rs 8.08 lakh crore business. The combined entity will have an advances base of Rs 3.51 lakh crore and a deposit base of Rs 4.56 lakh crore. Indian Bank had a bad loan ratio of 7.33 percent and its capital adequacy ratio at the end of the first quarter was at 13.62 percent.

Finance Secretary Rajiv Kumar said that the effective date of the amalgamation will be decided on the decision of the individual banks, and in consultation with the Reserve Bank of India.

Sitharaman, who had announced PSU bank recap of Rs 70,000 crore in the budget last month, also announced recapitalisation amounting to Rs 55,250 crore for the PSU banks.

Giving a break-up of which bank gets how much, the Finance Minister said that the PNB would get Rs 16,000 crore and Rs 11,700 crore will go to the Union Bank Of India.

Sitharaman said that this infusions would be for credit growth and meeting regulatory needs.

She also said that of the 18 PSBs, 14 had enhanced profitability in the first quarter of this fiscal, compared to six in fourth quarter of the last fiscal.

Announcing wider goverance reforms at PSU banks, the Finance Minister said that their boards will develop a career plan for all senior positions, while the Chief Risk Officer will be adequately empowered to decide on matters and act.

Consolidation among public sector banks has been on the agenda for the NDA government since 2014, when it first came into power. In 2017, the State Bank of India was merged with five of its associate banks and the Bharatiya Mahila Bank. In 2018, the government decided to merge the Bank of Baroda with the Vijaya Bank and the Dena Bank.

The government also allowed the Life Insurance Corporation to acquire 51 per cent in the IDBI Bank. 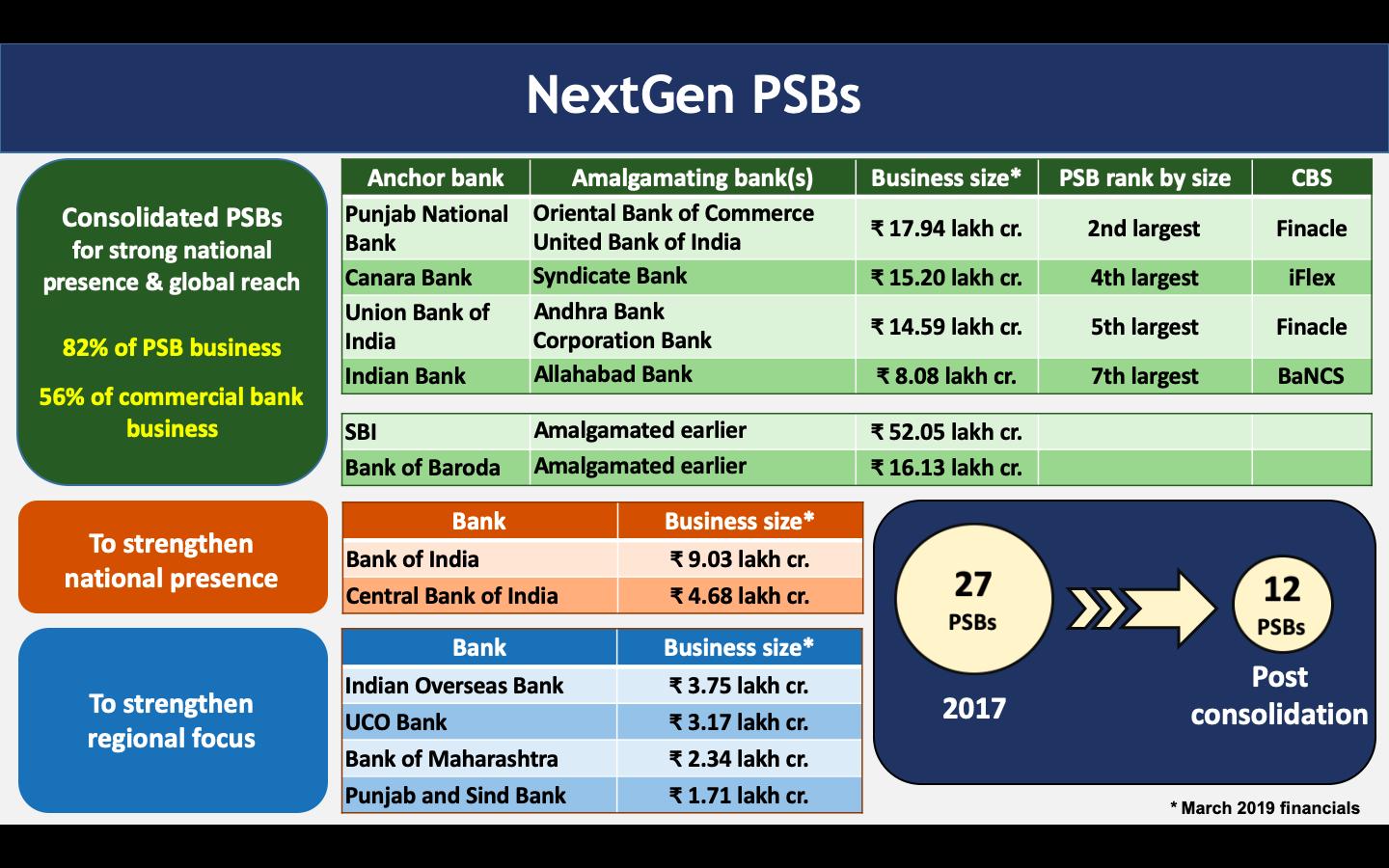