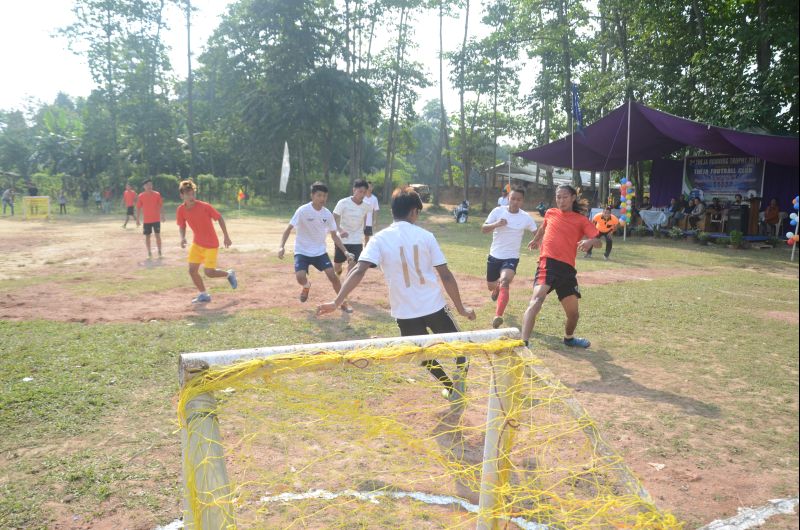 The second Theja Football tournament has just been concluded in Lengrijan. A brainchild of the Grace Covenant church, the tournament drew as many as twelve teams from different churches and colonies of Dimapur. The tournament was held from the 2nd to the 5th of December with the Head GB of Lengrijan, Mr N.Wati Longkumer doing the honours as the chief guest of the closing ceremony. Prizes were given away for the best disciplined team, highest scorer, best player and a cash prize for the winning team. Since the objective of the tournament was to encourage young people to take up sports, as well as give an opportunity to those who are avid football fans, there was an additional prize for the most promising player. The final match was played between the teams, Tribals United and a new team called Blitz FC. The Blitz FC took away the top spot in the match.

Lengrijan is often considered a forgotten place. Its youths are situated far from the town areas where all the action happens. This factor gave the church all the more reason to organise a sports events for the colony’s youth. The church had organised this tournament from the previous year as an ingenious avenue for the youths to have a tournament they can call their own. It is designed to be purely inclusive of all communities.

There are many young boys interested in football, as to be expected. But the girls are not to be left behind. They are just as enthusiastic as their male counterparts and the final day witnessed an exhibition match by two girls’ teams, the first one called Vixen 5, and another team called the Wolves. This was the first public match they had played.

I think raising football clubs should also be seen as an investment in the lives of our young population. In a world where young lives are being entrapped by mobile phones, and all that goes on in cyber space, sports is a healthy alternative that parents and the colonies should seriously consider. The story behind the team preparations for the tournament is inspiring and says a lot for the spirit behind this love of football. The members of the different teams raised funds themselves for their team expenses, doing all manner of odd jobs to earn enough money to meet the team expenses for the tournament. The church provided uniforms and football boots as well as refreshments and prizes. The male members of the church took it upon themselves to work on making the football ground level and stone-free. It was a community effort in the deepest sense of the word.

The members of the different teams that came to play were from these communities: Manipuri and Nepali, and there were players from all the Naga tribes. The church had extended invitations to all other communities living in Dimapur.

Fortunately, Lengrijan has the space and the enthusiasm for taking up football and other sports activities in a serious way if it were to pursue this. One hopes that the organisers would find sponsors as all sports activities cost money, and that sometimes becomes a deterrent for the future life of the tournament. For many of them, this is an event to look forward to in the year. Our children are so gifted; given the most basic elements, they can still pursue their passions. Surely they deserve more. The church’s efforts are to be lauded for providing an avenue for young sports lovers, and the spirit of the members coming together to each do their bit in making the tournament a success, is truly Christian. As profitable as a well preached sermon.