In conversation with the winners of GGPNL 2019 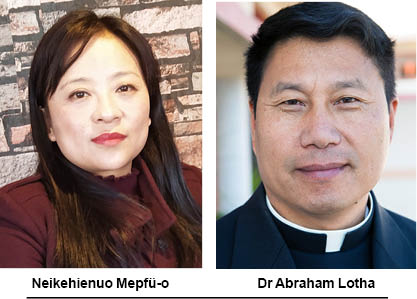 'My Mother's daughter'
“I have a story- a different story to tell. More so, a difficult story to tell. It is a story of abuse and violence. And whose story do we mostly tell when we talk about these things? -women and girls.”

These are the opening lines of the author's note in “My Mother's Daughter”, the debut book of Neikehienuo Mepfü-o that won the 2nd edition of Gordon Graham Prize for Naga Literature in the fiction category.

When the author initially started sharing thoughts about abuse on social media, the general notion was that Naga women are not abused as women in other parts of India. “I just want to show that the problem is also prevailing in our society”, she says, but clearly the book is a result of social issues being very close to her heart. What she did was use real stories of abuse in a fictional setting.

The greatest challenge in writing the book, she recalls was “getting the victims to speak about their lives, but once they started narrating, they were very honest about it, not hiding anything.” Further impressing upon that many of them didn't realise or know that they were abused victims. If names are not disclosed, they were however willing to share their stories, she adds.

On winning the Gordon Graham Prize for Naga Literature, she expresses “honestly, I didn't think I had a chance. I wasn't expecting and it came to me as a pleasant surprise. Even before sending out the manuscript to a publishing house, I was skeptical but I want to thank my publisher Dr Lanusangla Tzudir for agreeing to publish my book.”

Neikehienuo Mepfü-o currently teaches Functional English at Kohima College Kohima and having learned music at a young age, she plays the piano and also teaches music at home. She is currently writing a book surrounding the issue of mental illness. “I just want to work on social issues considered a stigma to talk about, if only to start a conversation”, she says and further adds that writers like 'Easterine Kire, Temsula Ao, Monalisa Changkija and Nini Lungalang have paved the way for young writers and opened doors for us to be brave and bolder to write about issues.'

The Hornbill Spirit
“Many in Nagaland have a tendency to think that literature among the Naga people has to do with only works dealing with English literature for academic purposes.” However Abraham Lotha, who won the Gordon Graham Prize for Naga Literature in the non-fiction category for his book- “The Hornbill Spirit” says, “there are many other engaging, provocative and note-worthy books that Nagas have written. It would be a mistake to confine literary works only to English literature.”

Towards this end, he says, “It is refreshing and encouraging that the Gordon Graham Awards Committee selects works from different literary genres by Nagas.” Stating that “I am humbled that The Hornbill Spirit is honored with this award”, he puts across that the book was not written in the hope that it would win any special recognition but rather that it would make a helpful contribution to a greater understanding of Naga identity and history. “I am pleased and encouraged that readers and the selection committee find that this book is worth reading”, he expresses.

On his experience on writing the book, he shares that “preparing any book for publication can be a labour of love” while stating that “writing and revising The Hornbill Spirit was certainly that for me.” “The research, the drafts, the writing and editing, all took many years to come together, often while engaged in other full-time responsibility. I had to write and finish this book, however, in order to move on with writing on other subjects”, he further enlightens.

He goes on to say that the subject of this book is dear and personal to him which is why he had to be careful not to let his feelings get in the way of dealing with the material as objectively as possible. Another challenge, he states, was to find the balance between writing that met professional academic standards and at the same time was accessible and understandable for common readers in Nagaland.  “A greater challenge, of course, was how to write in a way that contributed to an intellectual understanding and resolution of the Naga political issue. At this time, resolving the Naga political conflict presents a great opportunity for India and the Nagas to be creative in finding a win-win solution”, he emphasizes.

Abraham Lotha is currently working on a book on Naga Spirituality in the hope that it will add an original Naga contribution to the wider context of global spiritual heritages.  It may be noted that Abraham Lotha is a Naga Catholic priest, an anthropologist with wide international experience and commitment to indigenous peoples issues. He has a master’s degree from Columbia University, and a doctoral degree in socio-cultural anthropology from The Graduate Center, City University of New York.  As a Catholic priest, he has worked in Kiphire, Kohima, Bhandari, and Jakhama. As the Principal of St. Joseph’s College from 2011 to 2015, Abraham Lotha provided a significant leadership in higher education in Nagaland. He is the author of many books including The Hornbill Spirit, The Wounded Tiger, The Raging Mithun, and History of Naga Anthropology. He is also the President of the Lotha Academy and the Director of the Chumpo Museum, Sovima. He is currently serving as the Pastor of a parish in New Jersey, USA.