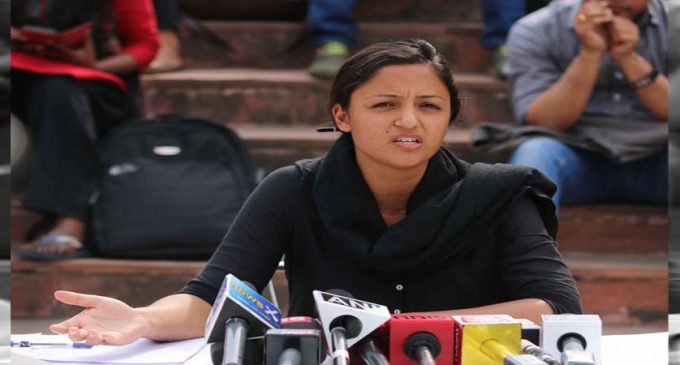 Confirming receipt of the lawyer's complaint, the police said it was being studied before any action against Rashid, who was JNU Student's Union vice-president in 2015-16 and is associated with the political party named the J&K Peoples Movement.

In his letter, the advocate mentioned some of the tweets posted by Rashid on her Twitter handle @Shehla_Rashid on Sunday in which she had claimed, "Armed forces are entering house at night, picking up boys, ransacking houses, deliberately spilling rations on the floor, mixing oil with rice, etc". Rashid claimed she got to know about it from the people coming from Kashmir.

"In Shopian, 4 men were called into the Army camp and "interrogated" (tortured). A mic was kept close to them so that the entire area could hear them scream, and be terrorized. This created an environment of fear in the entire area," Rashid tweeted.

Srivastava has said the allegations by the "accused are absolutely false, baseless and concocted, which is evident from the fact that she has not produced any voice recording of the alleged torture or name, date, time or any other specific information about the aforesaid alleged incident".

He also mentioned a statement of the army that said: "Allegations levelled by Shehla Rashid are baseless and rejected. Such unverified and fake news are spread by inimical elements and organisations to incite unsuspecting population".

Terming Rashid's act as "quite axiomatic", Srivastava said the "accused is deliberately and intentionally spreading the aforesaid FAKE NEWS with the intention to incite violence, to malign the image of the army nationally as well as internationally and to create unrest in the Union Territory of J&K and other parts of the country."

"...(The act) is to promote disharmony, enmity, hatred and ill-will between different groups and also to provoke breach of peace. The aforesaid tweet of the accused is being shared by many Twitter users on international platforms, causing irreparable damage to India's reputation," he said.

The lawyer said the "accused", vide her tweet, has intended to excite disaffection towards the government of India, which is prima facie an offence of sedition under section 124-A of Indian Penal Code (IPC).

He accused Rashid of committing offences of "promoting enmity between the classes under Section 153, 153-A, 504 and 505 of IPC, Information Technology Act, 2002 and amongst others.

"Thus the complainant, being a concerned citizen of India and a practicing advocate, is personally aggrieved by the aforesaid anti-national and seditious acts of accused, which have been done solely to destabilise India and hence, the complainant hereby requests you to immediately register FIR against the accused Shehla Rashid and arrest her, and take most stringent criminal action against her," the letter reads.