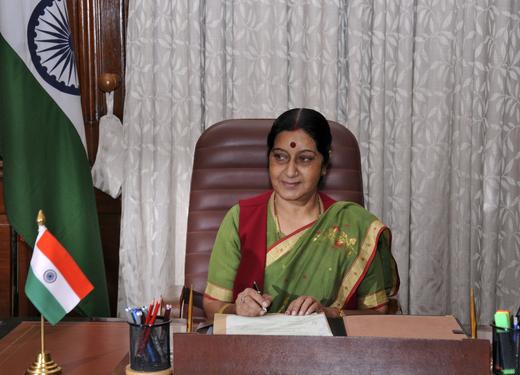 File Photo: Sushma Swaraj poses inside her office in New Delhi on May 28, 2014. (REUTERS/Stringer/Files)

The veteran BJP leader was brought to AIIMS in a critical condition but soon passed away, the sources said.

Union Ministers Rajnath Singh, Nitin Gadkari, Prakash Javadekar and BJP Working President J.P. Nadda arrived at the hospital as they got the news.

Prime Minister Narendra Modi condoled the death of Sushma Swaraj, who was External Affairs Minister in his first government, lauding her services in helping Indians abroad.

"An excellent administrator, Sushma Ji set high standards in every Ministry she handled. She played a key role in bettering India's ties with various nations. As a Minister we also saw her compassionate side, helping fellow Indians who were in distress in any part of the world.

"A glorious chapter in Indian politics comes to an end. India grieves the demise of a remarkable leader who devoted her life to public service and bettering lives of the poor. Sushma Swaraj Ji was one of her kind, who was a source of inspiration for crores of people," he said in a series of tweets.

A star minister during Modi government's first stint, Sushma Swaraj did not contest the 2019 Lok Sabha elections and chose to sit out of the government this year on account of her health.

In the tweet, Sushma Swaraj said, "Prime Minister, you gave me an opportunity to serve our countrymen and overseas Indians as the Foreign Minister for five years and personally, also, gave me respect throughout my tenure. I am very grateful to you. I pray that our government becomes very successful."

During here tenure, Sushma Swaraj was an important link between the government and the people and gave the external affairs ministry a human face for the first time. She was the troubleshooter for any Indian stuck anywhere abroad.

"Thank you Prime Minister. Thank you very much. I was waiting to see this day in my lifetime," stated her last tweeted posted at 7.23 PM, Tuesday evening, after the Parliament approved a resolution ending applicability of Article 370 of the Constitution to the state and passed a bill to create two Union Territories - Jammu and Kashmir, and Ladakh.