Homosexuality: A Construction of Understanding

“The emerging gay and lesbian movement offers not just alternate identities but prospects for social reconstruction. In spite of its marginality, the movement rejects the monolith and the mass. It is a reminder that if forced conformity is to be resisted it must be by representing human lives as multiple: selfhood as several; communities as voluntary and various.” – Sherry Joseph

Homosexuality has been a subject of discussion overtime. Various arguments have been on the spotlight for homosexuality. We often find ourselves being in a position where we don’t know what to say if anyone comes up and ask, ‘do you support homosexuality?’ or, some of us are quick to answer, either ‘Yes I do’ or ‘No, I don’t’. It’s quite saddening to see how we are pleased by victory and not progress. That is when we converse with people, we are so much over the intention that ‘I should win no matter what’ – meaning, ‘my statements should attack her statements’, not that, ‘I should listen and analyze the similarities and the differences.’ In the last few decades, we’ve observed the scale of LGBTQ community rising up and seen them speaking up - seeking for a reform. Sexual practices are a private matter to say; but they become politicized when groups or institutions try to stamp them out. The preference for gay or lesbian is very less in most societies even today. For that matter one can understand most people have preferences for dominant, or high status group –  say, white Americans, for straight people, for the youngsters, for thin people, light skinned, able people etc. are those are that we see abroad. One needs to ponder on this very thing that; if gays and lesbians claimed only the right to perform sexual acts, however, an establishment of a movement wouldn’t have been possible. Their claim leads one to understand their sexual identity, which is sufficient basis for a movement.

The term homosexual was coined in 1869 by K.M Kertbeny, a German doctor who opposed German sodomy laws. But was not popularized until the 1880s. it was adopted by people who wanted to make sense of their own identities which were not adequately explained by labelling them as ‘unnatural’ or ‘immoral’. The Judeo-Christian values and beliefs held that non-procreative sexual acts were a sin against nature and consequently frowned upon in the culture. The value system shaped the legal binding on the sodomy as a criminal offence as seen in the Indian Penal Code (IPC) until last year’s September sixth (6th ), the Supreme Court of India decriminalized homosexuality by declaring section 377 of the Indian Penal Code unconstitutional.

Homosexuality has been regarded ‘deviant’ and ‘diseased’ behavior, with the rise in medicines and psychology as powerful mastery and referee of morality. This control led to the condemnation of many fringe on non-traditional sexual practices, with homosexuality in the forefront. Psychiatry, for instance, included homosexuality in the ‘diagnostic manual’ and sanctioned interventions and treatments. On December 15, 1973, the board of trustees of the American Psychiatric Association, under the pressure of gays and lesbians lobbying: voted to remove homosexuality from the categories of mental illness. One view about the reason for this ‘validation’ and ‘normalization’, was that the psychiatric concepts of homosexuality did not rest upon scientific studies, but were derived from Christian asceticism. However, homosexuality was replaced with a new category, ego-dystonic homosexuality, denoting those homosexual individuals who were distressed by their orientations and wanted to become heterosexuals. This ‘compromise category’ did not last for long and finally all references to homosexuality were removed from the official nomenclature [Ronald and Bryan 1994].

Now, the causes of homosexuality are unknown, like the causes of heterosexuality. Whatever the factors that has caused it, homosexuality stands fixed and unchanging aspect of the identity of gays and lesbians. We have witnessed detailed discussions of this issue falling beyond the compass of our discussions, as we go on to see homosexuality in two ways: essentialism and social constructionism. For the essentialists, homosexual falls under the category of universal and trans-historical.  Some argue that it is genetic determinants, believing that they were born as homosexuals. Others believe that they have always existed  everywhere in the world. Social constructionists theory points out that individuals interpret their personal experiences through the framework provided by the social world and also, ‘identity is a construct reflecting the conceptual structure of the surrounding social world.’ We see that essentialism sharply differentiates homosexuals from heterosexuals, while social constructionist de-emphasis the differences. However, we all need to understand one thing that Heterosexual and Homosexual have one thing in common. It is the bond between two people, which is important.

As I write this with many references in hand, I long for something more vivid and strong stand still. Being a believer of, ‘stories needed to be told time and again’, and that every child learns anew, I bind my writing by stating,  let us all be in to learn for progress not victory. After all, individual sexuality is an individual matter, it doesn’t belong to anybody. Not to any Government, not to Family, not to Society, not to Culture-Religion-any Holy Scripture or any God.

Degree of Thought is a weekly community column initiated by Tetso College in partnership with The Morung Express. Degree of Thought will delve into the social, cultural, political and educational issues around us. The views expressed here do not reflect the opinion of the institution. Tetso College is a NAAC Accredited UGC recognised Commerce and Arts College. The editors are Dr Hewasa Lorin, Dr. Aniruddha Babar, Noyingbeni T. Erui, Meren and Kvulo Lorin. For feedback or comments please email: dot@tetsocollege.org. 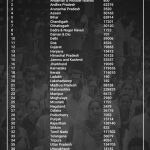 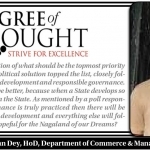 The Nagaland of Our Dreams
Morung Learning / 14 Jan 20 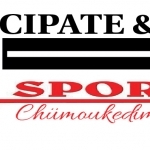 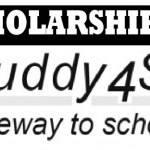 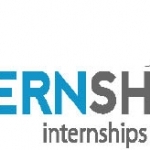