Journalists’ Forum, Assam (JFA) appealed to the people of Northeast India to celebrate the 73rd Independence Day on August 15 in a befitting manner. The scribe’s body argued that I-Day and Republic Day are two auspicious occasions for every Indian and they should pay respects to the "martyrs of freedom" struggle hoisting the national flag on both the "sacred" days.

"Incidentally, many separatist militant outfits of the region continue their diktats to sabotage the celebrations of I-Day.

United Liberation Front of Asom (Independent) and Coordination Committee (a conglomerate ofmilitant groups of Manipur) have once again asked the people to boycott the celebrations in the region. They even imposed a general strike  in the region terming it as western part of southeast Asia from midnight of August 14 till the afternoon of August 15," said the JFA statement.

The scribe’s forum of Assam then "denounced the armed militant outfits" and pointed out that every patriotic Indian should observe I-Day  and R-Day to pay his/her respects to the "martyrs of our freedom struggle for their supreme sacrifices". It added that nobody should pursue "confusions" that the Tricolour belongs to the government machinery alone, "but it is a priceless property of over one billion Indians".

The JFA then specially appealed to all journo bodies of the region, including local press clubs, press guilds, journalist union/associations etc to pay their homage to "martyrs" hoisting the national flag in their offices, residential colonies and localities on I-Day (and R-Day).

The forum also requested Guwahati based media persons and patriotic citizens to participate in the forthcoming I-Day function at Guwahati Press Club, where the Tricolour would be unfurled at 11 am "ceremoniously". 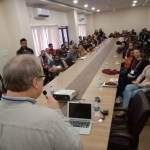