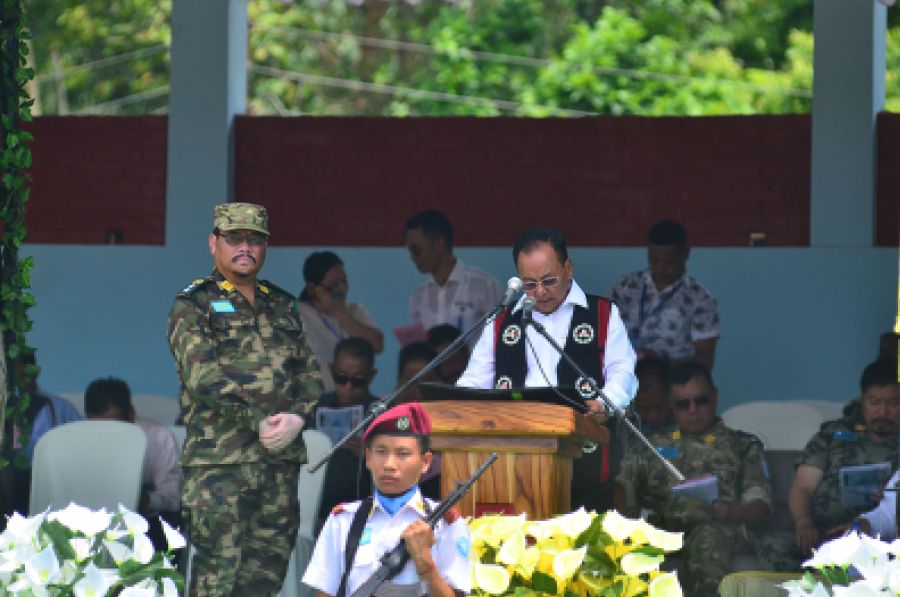 Yaruiwo (President), NSCN/GPRN, Q Tuccu, said the ‘Framework Agreement’ has become an important foundation and the mutually agreed competencies will define the nature of relationship of the two entities (Government of India and NSCN).

“Therefore, the two entities must exercise their best political wisdom and resource to emerge from the impasse over some of the core issues. The challenges are great, yet, I believe that no problem is too big to solve through mutual respect. An honourable political settlement of the two entities is the only way forward towards lasting peace in the region”, the NSCN (IM) leader said.

Addressing the 73rd Naga Independence Day celebration at Camp Hebron, Tuccu said the 16-Point Agreement and the 1975 Shillong Accord were no solutions at all, but rather historical blunders that led to further confrontations. “Hence it will be a great tragedy to repeat the same mistake again”, he said.

Stating that reconciliation is divine, Tuccu called upon every section of Naga brothers and sisters in different camps to come onboard for the final solution. Every issue with the neighbours must be resolved through respecting each other’s history”, the NSCN (IM) leader said.

Other highlights of the celebration were a minute silent prayer in remembrance of the Naga martyrs, Naga Army rank and award declaration, cultural presentation by Sumi and Chakhesang troupes, traditional trumpet sound by Guru AS Rawung and special numbers by GHQ Naga Army Band and GFT Hq Naga Army Band.

Framework Agreement based on unique history of Nagas: Raising

Convenor, Steering Committee, NSCN (IM), Rh. Raising said the ‘Framework Agreement’ was arrived at between the Government of India and NSCN/GPRN on the basis of the ‘unique history of the Nagas.’

Highlighting on the ‘Peace process’ at the 73rd Naga Independence Day celebration here at Camp Hebron, the steering committee convenor said understanding the reality of the uniqueness of Naga history, Government of India has finally recognized the sovereignty of the Nagas by stating that “sovereignty of the Nagas lies with the Naga people.”

On “Shared sovereignty”, Raising said Nagas do not accept the Constitution of India, but that Nagas and Indians will share sovereign powers on the basis of the Framework Agreement.

“We have been looking for a lasting honourable solution that will guarantee the rights of the Nagas and security of India”, the NSCN (IM) leader said.

Raising said since Nagas were forcibly divided into many pieces against their will and placed under different administrative units by the colonial powers, therefore unification of all Nagas under one political roof is their legitimate right and added Government of India also recognizes that right.

Informing that the talks also focus on the mechanism of inseparable, harmonious and interdependent relationship of the two entities and durable peace and progress in the land, Raising added “peace in the region is a prelude to the peace of the Indian sub-continent.”

“Facing many hurdles and difficulties in the talks, we have finally signed the historic ‘Framework Agreement’ and accordingly, we are working on for a final touch”, he said.