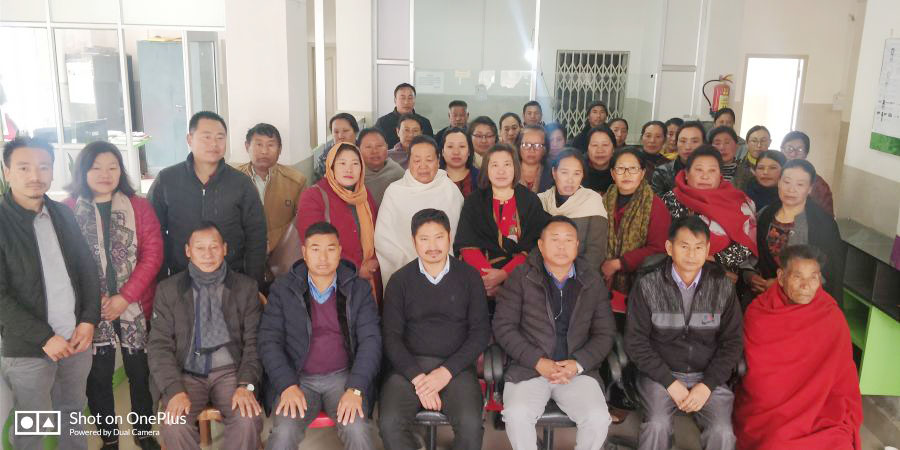 Nagaland State Co-operative Bank Pfütsero Branch officials with others during the interactive meet held with the customers at its branch premise on February 12. (Photo Courtesy: NStCB Pfütsero)

According to a press release received here, Mhathung Khuvung, Branch Manager, NStCB Pfütsero thanked the customers for reposing their trust on the Bank because of which the Branch could contribute much for the economic and social upliftment of the subdivision. He stressed on strong credit linkages especially to the Agri and Allied sector as the state and region being an Agrarian State which can strengthen with the commitment of the people only. He urged the customers to raise any issues where they feel the Bank/Branch lacks or need to do more. He also congratulated the Lirhukro SHG of the branch for bagging the best SHG in the state awarded by NABARD.

Kekhwengulo Lea, Vice Chairman, NStCB appreciated the staffs for bringing the branch from loss making to profit making. He asked the customers to make best use of various facilities provided by the branch. He reiterated that the living conditions of the people can only improve when the people make good use of the bank as it is only when the bank is strong that the economy of the people will also improve. He also shared his desire to making the bank a scheduled bank during his tenure and urged the branch to put more effort to bring down the NPA level.

The meeting started with an invocation prayer by Mulovoyo Tunyi, Youth Director, CBCC. The meeting was followed by an interactive session where many queries from the customers were answered.