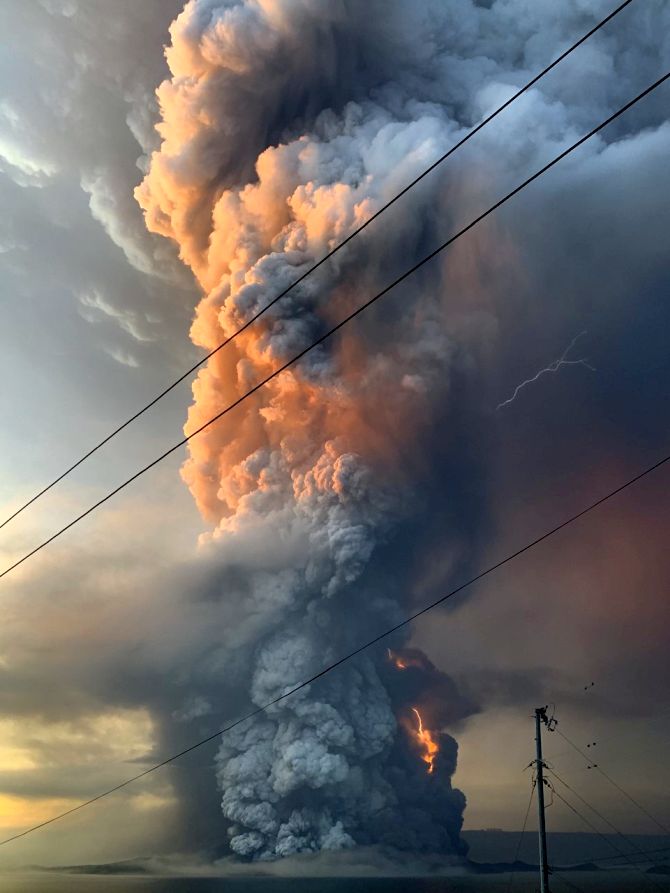 Lightning strike in the midst of Taal volcano explosion is seen in Lipa City, Philippines January 12, 2020 in this picture obtained from social media. Cheslie Andal/via REUTERS

Manila, January 14 (IANS) Philippine authorities were on high alert on Tuesday for a possible eruption of the Taal volcano, which has continued spewing lava and plumes of smoke and forced the evacuation of more than 30,000 people.

The Institute - which on Sunday raised the alert to level four on a scale of five - added that the volcano has caused 212 earthquakes, 81 of them of sufficient intensity to be felt, and that the ash emitted has covered several surrounding municipalities.

The alert implies that lava expulsions and an eruption were imminent and that there was a risk of a volcanic tsunami since Taal - one of the world's smallest volcanoes - is located inside a lake.

The director of PHILVOCS, Renato Solidum, said that the spewing of lava does not mean that the volcano has necessarily entered the dangerous explosive eruption phase, though he did not reject that possibility, either.

Nearby residents have been asked to refrain from entering the danger zone 14 km around Taal, whose continued activity has increased the number of displaced people to 30,423 people, according to the country's disaster management agency.

Of those evacuated, some 2,000 people are residents of the small volcanic island on Lake Taal.

In the capital Manila, about 60 km north of the volcano, normality was mostly restored Tuesday, although schools remain closed and several flights had to be cancelled at its airport, which has yet to restore full operation after closing Sunday.

Taal is an island within the lake of the same name, located within a caldera formed by a previous eruption and is part of a volcanic chain that extends through the western region of the island of Luzon.