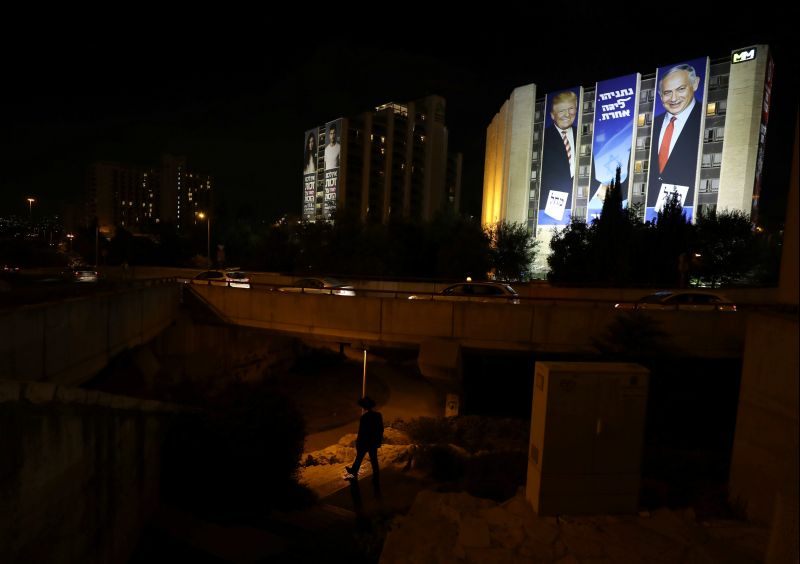 TIRA, Israel, September 12 (Reuters): Challengers to Israeli Prime Minister Benjamin Netanyahu in next Tuesday's election have courted Israel's Arab minority, hoping that a strong turnout from this unlikely source could tip the scales in their favor.

Gantz has appeared on Arabic language television, hoping to capitalise on the growing number of Arab voters ditching Arab parties in favour of other challengers.

"This is a change in strategy from the previous election," said Ram Ben-Barak, a Blue and White candidate and former deputy director of the Mossad intelligence agency who is leading the campaign to woo Arab citizens.

Blue and White is currently pollling neck-and-neck with Netanyahu's right-wing Likud party and its allies.

But frustration with disunity among Arab-dominated parties and dismay over what they see as Israel's discriminatory practices against them helped push the community's turnout to a 20-year low in the last parliamentary election in April.

Netanyahu failed to form a governing coalition after that race, leading to a new election.

More than 28 percent of Arab voters cast ballots for mostly-Jewish party lists in the April election, up from about 17 percent four years earlier, according to Arik Rudnitsky, a researcher at the Israel Democracy Institute.

Most of those votes went to Blue and White and the left-leaning Meretz party, data showed. Ben-Barak says the extra votes will help limit right-wing gains.

Most Arabs still vote for parties led by members of their community, which comprises mainly of descendants of the Palestinians who remained in their homes or were internally displaced after the 1948 war that surrounded Israel's creation.

Netanyahu's announcement on Tuesday that he plans to annex the Jordan Valley drew condemnation from Arab lawmakers, who regularly speak out in support of Palestinians in the occupied West Bank and Gaza, territory Israel captured in the 1967 Middle East War.

Ayman Odeh, who leads the Joint List coalition of four mostly Arab parties, said Netanyahu's pre-election pledge is part of his "right-wing apartheid vision" which consists of "erasing the civilian status of the Arabs in Israel" and "annexing the (Palestinian) territories."

However, despite the bid to win Arab votes, Gantz's Blue and White has given no indication it was trying to differentiate itself from Netanyahu on this issue.

Gantz told Army Radio on Thursday: "I am in favour of leaving the valley in Israeli hands in any possible scenario."

Indeed, annexation does not factor heavily into the Arab minority's political agenda, which focuses on issues of discrimination, inequality and crime in their own communities, according to the Konrad Adenauer Program for Jewish-Arab Cooperation.

Despite holding Israeli citizenship, many Arabs say they face discrimination in areas such as health, education and housing. Poverty among Arab citizens is 47 percent, compared with a national average of 18 percent, according to Israel's National Insurance Institute.

Netanyahu's Likud party counters that its 15 billion shekel ($4.2 billion) "is more than any government has ever invested in the Arab society," according to Eli Hazan, Likud's foreign affairs director.

In a rallying cry to right-wing supporters on election day in 2015, Netanyahu famously declared that Arabs were flocking to polls "in droves" to defeat him.

Arab turnout fell by a third to 49 percent in April's election, the lowest since 1999, the Israeli Democracy Institute said. Overall turnout was about 69 percent.

Netanyahu failed on Wednesday to pass a bill which would allow cameras in all polling stations next week. As the measure was debated on the Knesset floor, Odeh pulled out his cellphone and appeared to begin filming Netanyahu inches from his face, getting the lawmaker kicked out of the chamber.

"No prime minister has incited against Arabs like Benjamin Netanyahu," Odeh told Reuters at a campaign event in Tira, an Arab village in central Israel.

The Joint List ran on two separate tickets in April and saw their total representation in the 120-member Knesset fall from 13 to 10. This time, the Joint List has reunited in a bid to increase turnout.

"If we vote 65 percent and above, we will beat Netanyahu and the right-wing government," Odeh said.

Odeh in August said he would join a centre-left coalition -but only under a series of conditions, including resuming peace talks with the Palestinians and cancelling a law passed last year which declared Israel the "nation-state" of the Jewish people.

"We refuse to join any government that treats us as second-class citizens in our homeland," Odeh said.

But no Arab party has ever served in a governing coalition, meaning they have little say in shaping Israeli policies. With most Israeli parties having ruled out forming a coalition, some Arab lawmakers are advocating a different approach to having their voices heard.

"We don't have a psychological barrier to being in government," said Issawi Frej, an Arab politician in the left-wing Meretz party, which has joined the Democratic Union list backed by former prime minister Ehud Barak.

Frej has struck a chord with some Arabs who say they are tired of being expected to vote only for Arab parties that have little prospect of joining a ruling coalition.

"I am tired of engaging in identity politics," said Moataz Samara, an Arab citizen from Tira who has supported the far-left mostly-Arab party Hadash, which is part of the Joint List coalition.

"With Meretz, it doesn't matter if your name is Moshe, Mohammad, Elias, or anything else," said Samara, 25. "Change will only come if we engage and think differently".