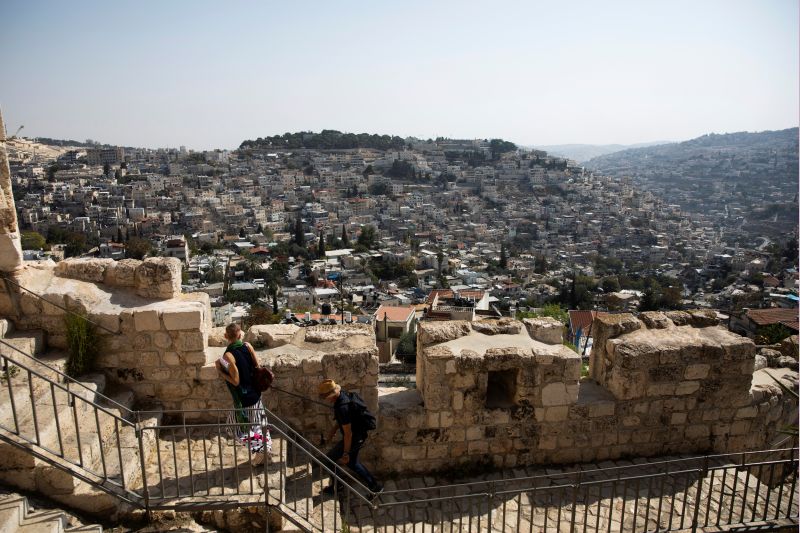 The Palestinian neighborhood of Silwan is seen in the background as people walk on a promenade on the surrounding walls of Jerusalem's Old City on November 7, 2019. (REUTERS Photo)

JERUSALEM, November 8 (Reuters): An Israeli plan to run a cable car over Jerusalem to the walls of the Old City has angered Palestinians who say it would erase their heritage in areas they seek for a future state.

The proposed cable car would shuttle some 3,000 tourists and worshippers per hour from Jerusalem's western part to the eastern Old City in a four-minute ride. The plan moved forward this week when a special committee headed by Israel's finance minister gave it a green light.

The government says the roughly 220 million shekel ($63 million) scheme will alleviate heavy traffic to the area, which packs out with tourists and residents visiting its many Christian, Muslim and Jewish religious sites.

"This is a strategic project to promote tourism to Jerusalem's Old City," said Israel's Jerusalem and Heritage Minister Zeev Elkin. Israeli officials say it will also serve Palestinian residents of the city.

But Palestinians say its planned route would place cable cars just metres above their homes in East Jerusalem and stir frictions over the future of a city at the heart of the Israeli-Palestinian conflict.

"The Israeli cable car project is an obscene violation of the cultural, historical, spiritual, geographic & demographic character of Jerusalem," Ashrawi said via Twitter.

The Palestinians want East Jerusalem, which includes the walled Old City, as capital of a future state. Israel annexed the area after capturing it in the 1967 Middle East war and says the entire city is its eternal and indivisible capital.

The cable car project, intended to be ready for 2021, must still win final government approval.

Tourists and guides at the Old City welcomed the project, saying it would reduce travel time and congestion. "The cable car is a very efficient way to appreciate the beauty of the place," said Socorro Calixto, a tourist from the Philippines.

But Palestinians in Silwan, an East Jerusalem neighbourhood at the foot of the Old City, said it would encourage tourists to bypass them on the way to holy sites.

"(It) will give the impression that it is a Jewish city and remove the Palestinian heritage from it," Silwan resident Khaled Al-Zeer said, adding that "the foundations of the project will be built on our land".

Yotanan Mizrachi, an archaeologist who heads the Israeli NGO Emek Shaveh, is part of a coalition that opposes the cable car on grounds that it is a "political project" that will cause "irreversible damage to the historic city".

"(It is) going to influence the way we see and understand the archaeology and the antiquity of Jerusalem," Mizarchi said.

Tourism will be a game changer for Meghalaya: Conrad
North-East / 28 Feb 20