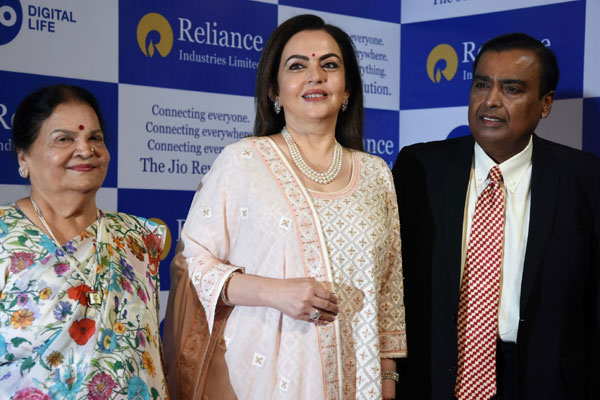 Mumbai, August 12 (IANS): Reliance Industries (RIL) Chairman Mukesh Ambani on Monday announced the launch of Jio GigaFiber and said that the services would be available commercially from September 5.

Speaking to shareholders at the 42nd Annual General Meeting (AGM), Ambani said that the tariff plans would be priced between Rs 700 and Rs 10,000 per month.

"We are pricing our plans at less than 1/10th the global rates, to make it accessible for all. JioFiber plans will be priced between Rs 700 to Rs 10,000 per month to suit every budget and every need," he said.

He further said that starting August 15, 2018, the company invited registrations of interest from across India so that it could prioritise Jio GigaFiber rollout into localities with the highest interest and the the response was "overwhelming".

The RIL Chairman noted that the subscribers of of Jio GigaFiber would get broadband speeds of up to 1 GBPS, along with a landline phone connection, at no additional cost. It also provides a digital set-top-box to the consumers.

"We have designed our Jio set-top-box to accept the broadcast cable TV signals from our LCO partners. So that with every JIOFIBER home all our LCO partners will continue to have a steady stream of revenue for their broadcast TV business. We look forward to extending this partnership to all LCOs across the country," he added.

He further announced that the Jio GigaFiber customers who opt for our annual plans -- "Jio-Forever plans", will get an HD (High Definition) or 4K LED television and a 4K set-top-box for free.

Further, for small and medium businesses Jio GigaFiber enables a combination of fixed-line connectivity and cloud applications and in terms of large enterprises Jio GigaFiber and Jio's cloud solutions level the playing field for Indian enterprises enabling them to accelerate their digital transformation and compete globally using the very same technologies that are used by global majors.

Ambani in his speech also said that customers should pay for only one service, either voice or data.

"With this, I am pleased to announce that voice calls from home (landline) to any Indian operator - mobile or fixed - will be absolutely free forever."

"Also, for the first time in India, we are introducing a disruptive concept for watching new movies. Premium JioFiber customers will be able to watch movies in their living rooms the same day these movies