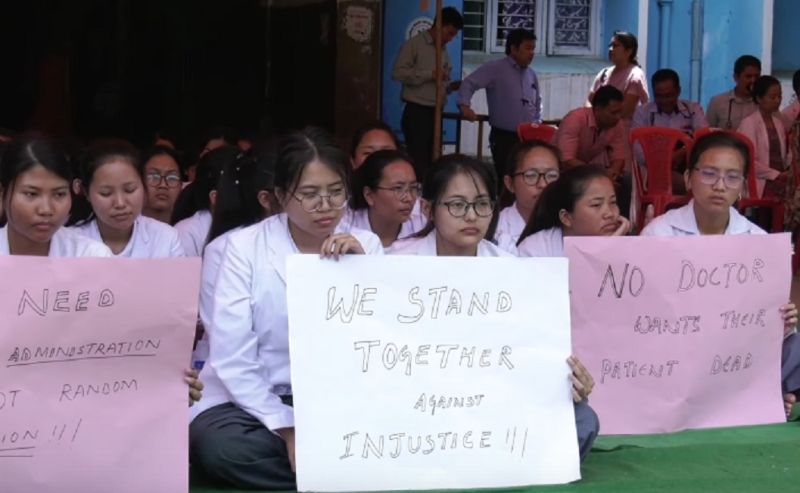 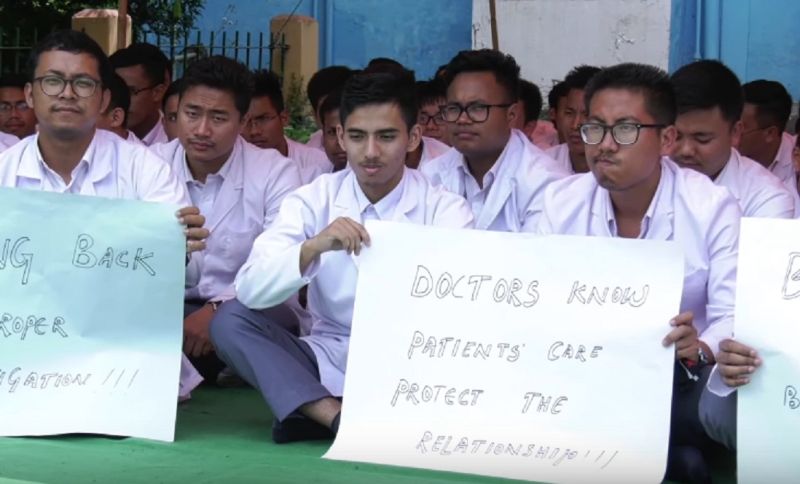 JNIMS doctors staging sit-in-protest in Imphal on Monday against suspension of a senior resident over death of a patient on August 19. (NNN Photo)

Doctors at Jawaharlal Nehru Institute of Medical Sciences (JNIMS) hospital in Imphal protested on Monday against the suspension of a senior doctor in connection with the recent death of a patient.

A patient, who was admitted in JNIMS on July 8 and delivered a baby on July 10, died on August 14.

Dr Nimmi, a senior doctor (obstetrics and gynaecology) at JNIMS who led doctors’ team in treating the patient was suspended by an order of the state Health and Family Welfare department under which the hospital is functioning.

She was placed under suspension following a strong pressure from the family, relatives and villagers of Sekta in Imphal East district where the deceased woman hailed from.

The doctors alleged that the suspension order was issued without any basic departmental inquiry and it has greatly affected to the working atmosphere of the doctors of the government run hospital.

Failure on the part of the government authority to revoke the suspension order, doctors of the hospital suspended their duties of the day and staged a sit-in-protest inside the hospital campus.

The protest staged under the aegis of Teachers Association of JNIMS has greatly affected to the normal healthcare service in the hospital where hundreds of people turned up every day at the OPD (Out Patient Department).

“We Stand together against injustice,” “No doctor wants their patient dead”, “We need proper administration not random suspension,” read the placards displayed at the protest site.

He demanded immediate revocation of the suspension order of their colleague, while urging authority to submit the enquiry report against the doctor within 10 days.

Dr Kumarjit then asked whether doctors are going to suspend from their service for every death of patients. “In such attitude (of the administration) we are afraid of attending patients,” he added. He further alleged that Dr T Nimmi was being victimised following the death of a female patient who was admitted under her.

The spokesperson pointed out that Dr Nimmi did carry out the operation along with a number of staff under the supervision of the unit head of the department and alleged that suspension of Dr Nimmi was illegal, wrong and violated all rules and regulations of the hospital.

“We will not bother if Dr Nimmi is found guilty in the enquiry being initiated by the hospital administration. We will agree taking up legal action against her if she was guilty,” he added.

There can be no proof of religious persecution: BJP's Sarma
North-East / 19 Jan 20