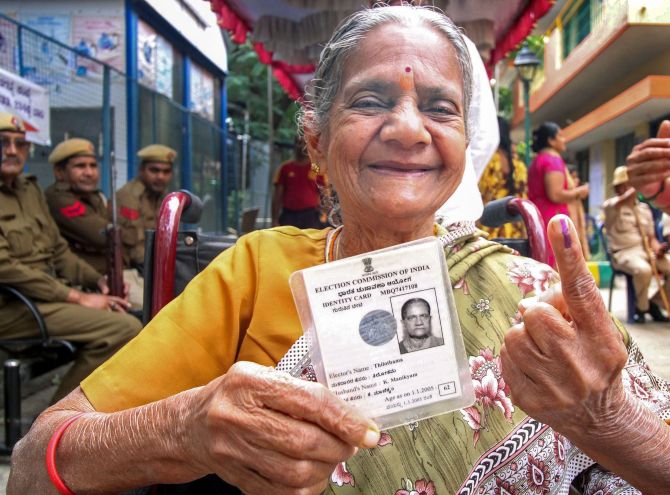 A elderly woman holds her voter identity card as she shows her inked finger after casting vote during the bye-poll of Mahalaxmi Layout constituency, in Bengaluru, Thursday, Dec. 5, 2019. (PTI Photo)

Bengaluru, December 5 (IANS) The crucial by-elections on Thursday to 15 Karnataka assembly seats, which are set to have a bearing on the state's political course, witnessed moderate to heavy turnout with over 70 per cent in seven constituencies by 5 p.m., and about 60 per cent in the rest 8 seats, an official said.

"Voting has been full swing since 3 p.m., as evident from over 70 per cent polling till 5 p.m. in 7 of the 15 Assembly seats," poll official G. Jadiyappa told IANS.

Polling in Bengaluru's four crucial seats gained slight momentum after remaining dull since morning to 3 p.m., and the percentage was 37.5 per cent (lowest) in K.R. Pura, followed by 40.47 in Mahalakshmi layout in Bengaluru west, 41.43 per cent in Shivajinagara and 48.34 in Yeshvanputapura.

Barring glitches in the EVMs and voters names missing in the electoral list in some polling stations, voting was peaceful amid tight security.

However, there were also reports of voters boycotting the polls in some areas over various issues.

"We are confident that the average voter turnout in most of the seats will be 75-80 per cent," BJP state unit spokesperson G. Madhusudan told IANS. "Voting has always been moderate to heavy in semi-urban and rural areas unlike in cities where urban apathy to voting has been the bane of elections in the past too," he lamented.

Chief Minister B.S. Yediyurappa appealed to the electorate to exercise their right to vote in large numbers and strengthen democracy.

Congress leaders also appealed to the people to come out of their homes and exercise their right to vote.

Meanwhile, the poll official said: "The Election Commission has declared paid leave for the voters working in public or private offices to exercise franchise in their polling stations."

As many as 165 candidates, including 126 Independents and 9 women are in the fray in the 15 Assembly seats, necessitated by the resignation - and subsequent disqualification - of 14 Congress and three Janata Dal-Secular rebel MLAs which led to the collapse of the then H.D. Kumaraswamy-led Congress-JD-S coalition government.

However, bypolls are only being held in 15 seats, since there is ongoing litigation in the Karnataka High Court over the results of two seats -- Muski (Raichur district) and R.R. Nagar (Bengaluru) in the May 2018 Assembly elections.

The BJP and the opposition Congress are contesting in all the 15 Assembly seats, while the JD-S only in 12 seats.

The outcome of the bye-elections on December 9 will decide the survival and continuation of the four-month-old BJP government in the southern state.

The ruling BJP, which has 105 members, including one independent but excluding the Speaker, needs to win seven more seats to have a majority in the 225-member Assembly, whose current strength is 223.

The Congress has 66 members, the JD-S 34 and the Bahujan Samaj Party (BSP) one.