Looking back to the past for a solution to the future

Why must we look back to the past in order to find a solution for the future? The answer is simply: “Because the present is too suffocating to go on.” As breathing, seeing and hearing human being, one cannot help but see and hear the things that are going on around one. From my house at mission Compound, watching Kohima town at sunset is a beautiful sight to behold. But despite the golden exterior, I know that many problems lie simmering underneath. These are the daily reports of gross corruptions in the State establishment, the exorbitant extortion's in the name of Naga nationalism- all of which are leading to a very high cost of living for the ordinary citizen of Nagaland. All these evils are also leading to a general landslide of ethical moral and cultural values. When one thinks and also experiences all these things on a daily basis, a cloud of despair descends upon one’s shoulders and darkens the soul within.

Surely, somewhere along the way, some other people had given some misinformation about Naga intentions and led others to misinterpret Naga intentions of freedom and friendship with their neighbours and the whole world. For the ordinary Naga citizen today, the premonition of despair is a very real and palpable one. Something indeed is very wrong with Naga politics, Naga economy and Naga society. I therefore think that it is imperative for every Naga to go back into our history and find the causes which have led to the present dilemma.

As already stated in an earlier article, at the initial stages of going our own separate ways, after the British left, the Nagas, had absolutely no ill will towards India in the late 1940’s.  However, some other people bent on political mischief had made a simple issue into a very complex and fearful one. Some of these people projected Phizo as a violent man who was bent on going to war with India (though in actual fact, Phizo was one who had seen the horrible effects of war in Burma and was quite apprehensive for his people’s fate in case a most unwanted war should erupted between Nagaland and India). Then there were other people who painted the Nagas as wild head hunters eager for taking enemy heads. Still, there were those who wanted the Indian army to devastate the feared Naga villages and their inhabitants. This included some of our immediate neighbours who played dirty politics for their own selfish reasons.

To begin with, some of these neighbours also fought the British to protect their own kingdoms. However, when they were ultimately defeated, they entered into political collaboration with their former enemies and started offensive actions against the Nagas. They did this by first claiming traditional Naga lands as British demarcated lands of their own and armed by British muskets started attacking Naga villlages. These aggressive actions took place both in the north as well as western parts of Naga territory.

In the second phase, some of these neighbouring states again allied with the newly established Indian nation and started harassing and advancing into traditional Naga territory with the assistance of the Indian army. At the initial stages of the conflict, the Armed Police of these neighbouring states, raped tortured and even killed many Naga civilians so that they could later turn against Indian soldiers for revenge. After occupying our lands, they started to arrogantly assert that not even one inch of their (enlarged) territories will ever be surrendered to the Nagas even if an Indo Naga political solution takes place. Their boastful threats still continue today.

However, whatever claims they may be making under the protection of India or the departed British, ancient boundary pillars and ancient Naga settlements are still all there for anyone to see and verify. After all, Naga territories have never been moving like migratory birds from Nagaland into Manipur, Assam, Burma or Indian territories over the years!  Nagas will also never part with any of their territories now or even in the distant future. For the moment, Nagas are dealing with the bigger issues and only later, will come to the immediate neighbour issues. Here, Nagas having fought the British from 1832 to 1947 (115 years), and also having fought India and Burma from 1947 to 2019 (72 years); they are not at all intimidated by any neighbour’s false claims over their lands or their boisterous threats.

Coming back to the main issue, A.Z. Phizo’s summarization of Naga intentions in 1948 (as communicated to Rajagopalachari – the then Governor General of India) were as follows:

“In conclusion let me enumerate briefly that:

a. There is no secret and no danger in the Naga Hills.
b. The final say is with the people and not with a particular individual.
c. The Naga are not planning Machiavellian politics.
d. The consideration of balancing a power or seeking a strong partnership is out of the question.
e. The Naga people are not against the Indian union...
f. Freedom, liberty and peace are the first and last consideration.
g. The Nagas stand for sanity and are appealing to you for an understanding.”
(A letter from Prison-Nagaland and India...pp. 359-409)

But in spite of all these pleas and appeals, the very good intentions of the Nagas were completely distorted by other ill wishers and Nagaland and India were plunged into a senseless war for the past 72 years. To rectify these mistakes and find a solution, we must go back to past history and find our way back to peace and good neighbourly relationships.

NB. Nagas too have made political blunders and contributed to the present mess. But those events have already been exposed extensively by the present author, so I will not repeat myself here again. 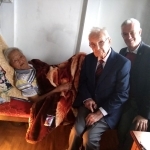