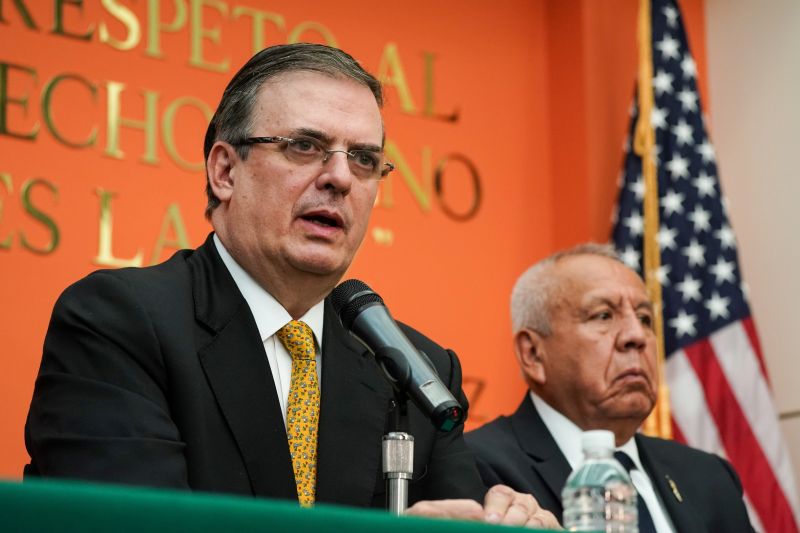 The court on Wednesday said that so long as the issue is being litigated, immigrants who want asylum can be required to first seek safe haven in a third country through which they travel on the way to the United States.

"This is the ruling by the court, it's a U.S. issue, and obviously we don't agree with it, we have a different policy," Foreign Minister Marcelo Ebrard told a regular news conference.

The Mexican government would evaluate the court decision, Ebrard said, while reiterating that Mexico would not accept becoming a safe third country for migrants and an effective buffer zone for the United States.

Mexican President Andres Manuel Lopez Obrador has been at pains to avoid angering U.S. President Donald Trump in the fraught discussions over trade and migration, mindful that Mexico sends around 80% of its exports to the United States.

Mexico's government has consistently favoured alleviating migratory pressures by helping to develop the countries that send the bulk of migrants north, the Central American trio of Guatemala, Honduras and El Salvador.

Ebrard said he expected the number of migrants trying to reach the United States from Mexico, which has fallen in the last three months, to drop further.

Trump has praised Mexico for reducing the flow of migrants, but Mexican officials are conscious the issue remains a threat to bilateral ties.

This week Mark Morgan, acting commissioner of U.S. Customs and Border Protection, said that 64,000 people were detained or turned back at the U.S. southwest border in August. That was down 22% from July and 56% from a high mark in May.

Ebrard said that it was in his country's interest to keep migrant numbers down to avoid tensions with Washington on the issue in the run-up to the 2020 U.S. presidential election.

Following threats in late May by Trump to impose tariffs on all Mexican imports, Mexico on June 7 pledged to take a series of steps to curb migration, including sending thousands of its National Guardsmen to the country's borders.

The two governments agreed to take stock of that effort after 90 days and Ebrard held talks with senior U.S. officials in Washington on Tuesday to review the results. He afterwards said the country was a long way from facing tariffs.

The Trump administration has pressed Mexico to accept becoming a safe third country, which would oblige migrants seeking asylum to make their applications in Mexico.

Though Mexico is resisting that, the country has agreed to take in more asylum-seekers from the United States while their requests are being processed in U.S. courts.

Highlighting the dangers faced by migrants in Mexico, where gang-fuelled violence is at record levels, Ebrard said about 20 cases of migrant kidnappings had been investigated so far.

Lopez Obrador and his U.S. counterpart Trump spoke by telephone on Wednesday.

Speaking at the same news conference, Lopez Obrador said the call was fruitful and there was nothing that would lead to the imposition of measures that would hurt the Mexican economy.

Asked whether the two presidents could meet in person, Ebrard said the matter has been under consideration, but that there were no plans for a meeting in the short term.