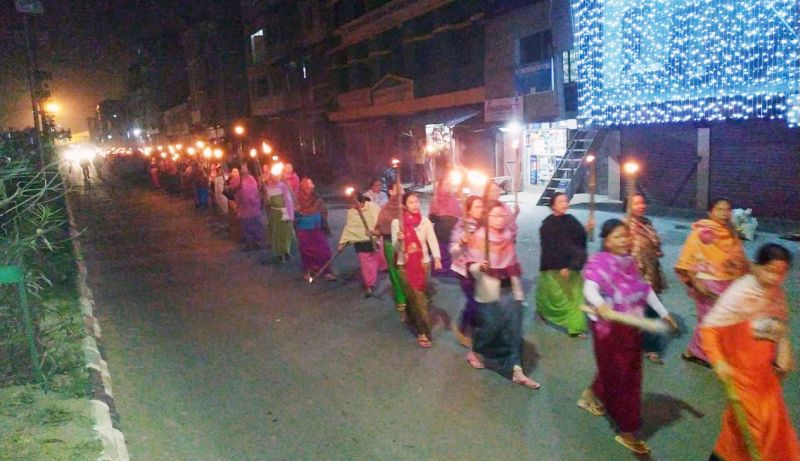 Women during torch rally as part of alert protest on Naga peace talks in Imphal on November 6.

Urging the Centre not to "disintegrate" Manipur, torch rallies were held on the night of November 6.

The "alert protests" were also staged on Thursday widely even as similar torch rallies were planned to march on Thursday night responding to the call given by Coordination Committee on Manipur Integrity (COCOMI).

Meanwhile, amid the mounting pressure to disclose the "agreed points" of the negotiation between the Centre and the Naga organisations to resolve the Naga political issue, Manipuri film fraternity has decided to impose a ban on the "outdoor" screening of films with immediate effect on Thursday.

However, screening of films in the cinema halls will not be covered by the ban, Film Forum Manipur (FFM) announced.

Addressing a press conference at its office, chairman of the Forum, S Mangoljao said that the decision to ban "outdoor" shooting of the films was taken in view of the "volatile" situation of the state.

The decision of the Forum was endorsed by 12 constituent organisations of the FFM, Mangoljao claimed. The ban will continue until normalcy is returned in the state.

He added that film fraternity further decided to support people’s movement for the protection of the Manipur integrity. The Forum will also take part in the ongoing "alert protest" underway in the valley districts under the aegis of COCOMI.

Meanwhile, Left parties in Manipur have joined the chorus demanding a special session of the state Assembly to take a fresh resolution to safeguard the territorial integrity of Manipur.

An emergency meeting of the four Left parties – CPI, CPI(M) AIFB and RSP convened on Wednesday at CPI State Council office at Irawat Bhavan in Imphal.

A joint statement of the Left parties said that after a threadbare discussion on the issue, it was resolved to press for convening special session of the State Assembly to discuss and adopt a fresh resolution in the "interest of Manipur and its people."

"Fresh resolution of the Assembly opposing any move to disintegrate Manipur and formation of ethnic based territorial council must be sent to both the Houses of Parliament, for which the sessions are to commence from November 18," the Left parties in Manipur said.

Shah assures Sonowal on impact of talks on Assam

Guwahati, November 7 (IANS): Union Home Minister Amit Shah on Thursday assured Assam Chief Minister Sarbananda Sonowal that nothing would be done which goes against the interests of Assam and its people as far as the Naga talks are concerned.

The assurance came after Sonowal met Shah at the latter's official residence and talked at length on Naga Accord. Along with the people of Manipur, the ongoing talks between the NSCN (IM) and the Central government has led to apprehension among people in Assam and Arunachal Pradesh about losing their territory.

Sonowal requested Shah to take into consideration the interests of the people of Assam while going for any accord.
He also drew Shah's attention to the popular public demand regarding Numaligarh Refinery Limited (NRL) and sought his cooperation for NRL to maintain its status quo as public sector undertaking. The Chief Minister also met Prime Minister Narendra Modi and spoke to him about the mood of the people in Assam, particularly over the Naga talks and privatisation of NRL. Modi gave a patient hearing to Sonowal and assured that the Centre would consider the interests and aspirations of the people of Assam before taking any decision. There were announcements recently by the Central government to privatize the NRL, which was a part of a historical Assam Accord signed in 1985

Tourism will be a game changer for Meghalaya: Conrad
North-East / 28 Feb 20