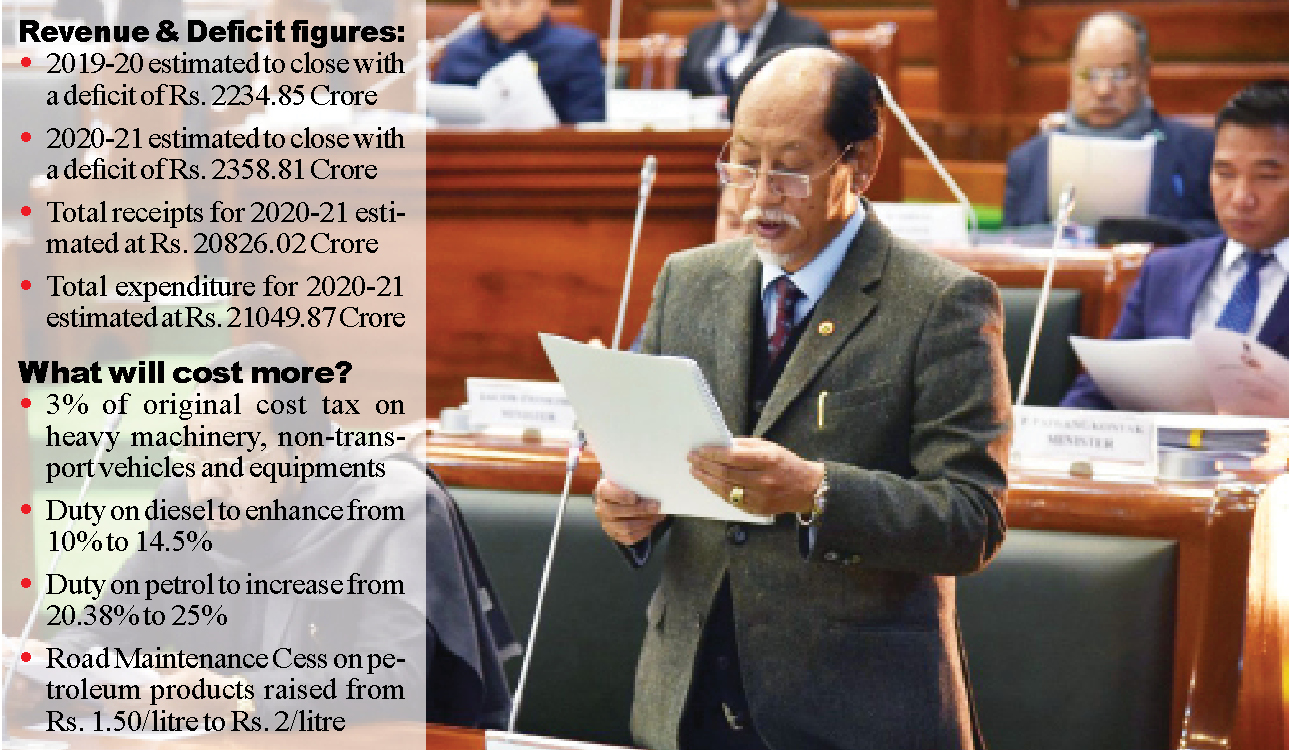 As the Nagaland State Budget showed an estimated deficit of Rs 2,234.85 Crores for the period 2019-2020, the Nagaland Government will levy new taxes on heavy machinery and non transport vehicles, while increasing taxes on petroleum and diesel products.

He further projected that the upcoming 2020-21 period is estimated to close at an increased deficit of Rs 2358.81 Crores.

The increase in the deficit, according to the Chief Minister, was due to reduction in State share of taxes from the Central Government and the toll on the State’s coffers due to the excess of government employees.

As per the revised estimates of the Union Budget, the share of State taxes has been reduced to Rs. 3267 crore, a reduction of Rs. 939 crore.

He meanwhile said that a majority of the funds received from the Centre is used for payment of salaries, pension, debts etc.

As per norms, 65% of the amount in the budget is to be spent on development and 35% on non- development purposes. However, the CM stated that the mode of spending in Nagaland is totally reversed.

He meanwhile said that the State is left with a financial liability of Rs. 529 Crore due to discontinuation of Special Plan Assistance.

Rio said that the lack of adequate resources has always been a problem for Nagaland because of its small tax base. As such, he welcomed the introduction of GST and informed that “we have brought almost all dealers into the tax net.”

“GST has brought the additional benefit of destination based principle because of which consuming States are being benefitted. But our tax base will gradually get saturated, leaving us with fewer options,” Rio added.

The government is also actively examining other options to generate more resources for funding developmental activities. The exercises are expected to be implemented within the current financial year, Rio informed.

He meanwhile urged citizens to pay their dues to the government in the form of water and power bills and other taxes. “We will also continue our efforts to streamline the revenue collection systems to enhance efficiency and increase transparency,” he added.

Revenue increasing measures
As measures to increase revenue meanwhile, the CM informed that the Government would levy a one-time tax of 3% of original cost on heavy machinery, non-transport vehicles and equipments for the first 10 years purchased within the State as well as brought into the State for commercial activities. For the next 5 years the rate of tax shall be reduced to 1.5%. Those declared to be for exclusive personal use and agricultural tractors are exempted.

Meanwhile, a one-time tax of 3% of original cost for the above category of vehicles and machinery not registered in the State and yet to complete 10 years but plying in the State for commercial activities, after allowing for depreciation, will also be set.

Annual entry fee at 1% of the original cost will also be levied on the above category of vehicles registered in other States but brought into the State for temporary commercial purposes.

Road Maintenance Cess on petroleum products is also being raised from Rs. 1.50 paise per litre to Rs. 2 per litre.
These measures are expected to generate additional revenue of Rs. 33 crore annually.