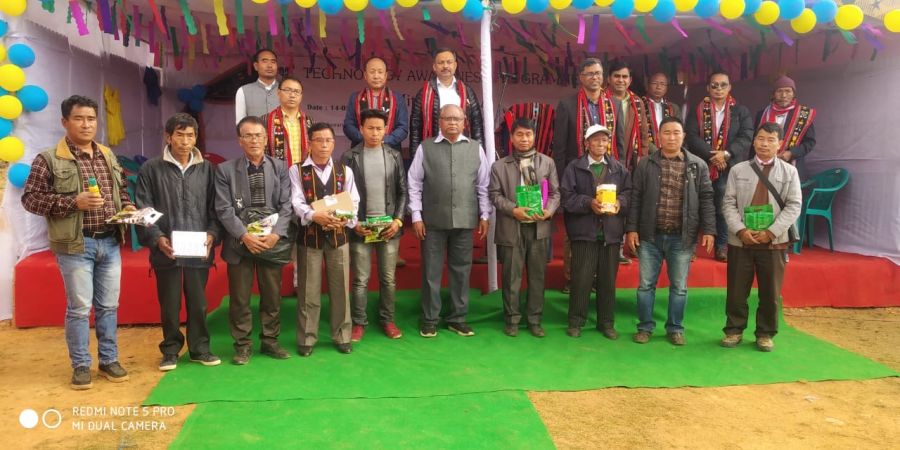 Dr Narendra Prakash, former Director of ICAR research complex for NEH region, Barapani graced the occasion as a chief guest. In his inaugural speech, chief guest urged the farmers to adopt the technologies available with Mithun institute for improvement of Mithun. He also emphasized that jhuming and rampant deforestation in Manipur and Nagaland is a major constraint in Mithun production and development.

Dr Prakash also said that the line department should also come forward and take part in dissemination of the technologies.

Dr MH Khan, principal Scientist from ICAR-NRC on Mithun in his welcome address highlighted the challenges faced by the farmers in rearing mithun under free range system and emphasised the introduction of semi- intensive model of rearing for better production.

Altogether, a total of 365 farmers attended the programme, where about 35 numbers of Mithun were brought to the site. All animals were vaccinated against FMD, HS and BQ diseases which are the major cause of mortality in Mithun. Inputs in the form of common veterinary medicines, mineral mixtures, deworming medicines, ointments and antibiotics were distributes to the farmers.

The Mela also adjudged 'best Mithun cows, best Mithun heifer and best Mithun calf.' A total of 9 farmers were awarded with certificate and prize. A farmer was also awarded for bringing maximum number of Mithun (8). Farmer-Scientist interaction was held in the concluding session.