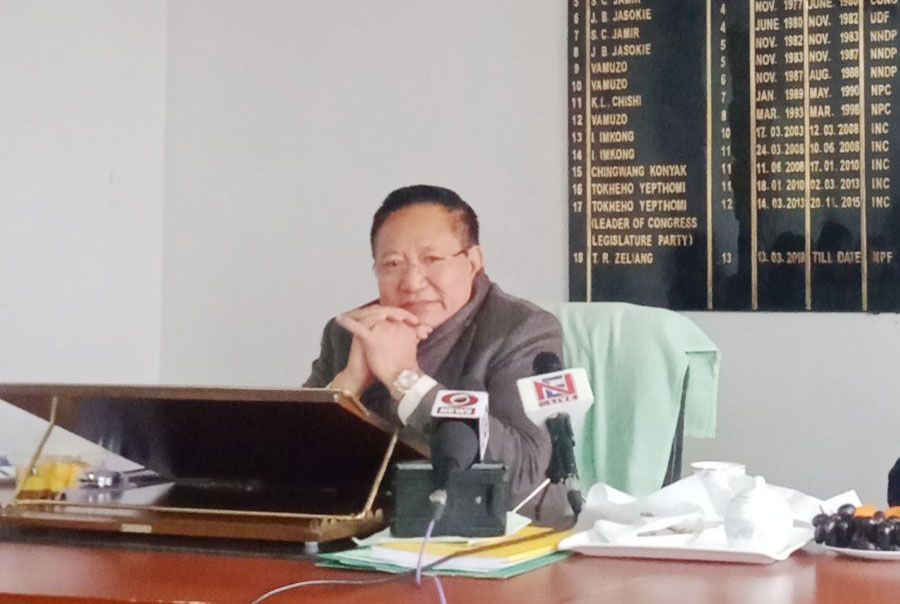 In view of the non-admittance of the Securitisation and Reconstruction of Financial Assets and Enforcement of Security Interest Act, 2002 (SARFAESI Act) for discussion under Rule 50 of the Rules of Procedure and conduct of Business in Nagaland Legislative Assembly (NLA) during the ongoing 5th session of the 13th NLA, Opposition leader TR Zeliang today expressed unhappiness over the matter and wrote a letter to Chief Minister Neiphiu Rio.

Addressing a press conference here today, Zeliang stated the implication of the SARFAESI Act, 2002 in the context of Nagaland is one that calls for urgent attention since PDA Government has failed to take any concrete measures to solve the problems faced by the citizens of the state.

The letter, which is also addressed to Nagaland’s Governor and NLA speaker stated that banks in the state stopped financing against residential commercial buildings and high education loans out of apprehensions arising out of a letter that was written by Deputy Secretary, Law and Justice to Secretary Finance Department.

Zeliang stated that at present, banks in the state have stopped financing against residential/commercial building and high educational loans out of apprehension as stated above.

“As such the borrowers in the state are sandwiched between the state Government and the Bank; it is therefore expected of your Government to clarify on whether the State of Nagaland should uphold the Act or reject it. If we are to accept the Act, your Government must send a clear building and high education loans simply out or apprehensions and speculation based on a mere letter Witten by Law and Justice Department?” Zeliang stated.

Zeliang stated that when Banks can initiate Loan Recovery process legally by filing Civil Suits, Money Suits, Title Suits etc. why has it stopped giving out loans to borrowers in the State on the pretext that the letter of the Justice and Law Department would be detrimental to the Banks?

He questioned that when the Justice and Law Department including the District Administration, Dimapur have forwarded the matter to the State Government for directions, why the present day Government still sleeping over the matter.

Zeliang stated that the SARFAESI Act, 2002 has neither been deliberated upon in the Nagaland Legislative Assembly nor has any Assembly resolution been adopted till today.
Nevertheless, sensing the gravity of the prevailing situation at hand, Members from the Opposition Bench had proposed the matter for discussion. The SARFAESI Act, 2002 was listed in the Provisional Programme of Business as decided by the Business Advisory Board (BAC) and was scheduled under the Calendar of Sittings for discussion under Rule- 50 of the Rules of Procedure and Conduct of Business in Nagaland Legislative Assembly. However, the matter was rejected and not allowed for discussion as a consequence of notice with reference to Rule-55, Zeliang stated.

Zeliang stated that the action of preventing the matter from being discussed on the floor of the Assembly “depicts a scenario which is doubtful message to the State Level Bankers Committee (SLBC) and to the citizens of Nagaland.”

Today, Zeliang stated that due to non-availability of loans from the Banks, the common men in the State are left to the mercy of private money lenders.
Young entrepreneurs including students are left without funding options; local Contractors and Suppliers including Businessmen have failed to obtain Bank Guarantee from Banks against their immovable property within the State.

The common men particularly businessmen and student community are facing untold hardship due to this in attention of Government on the burning issue, Zeliang stated adding “Neither Banks nor the State Government have come up with any remedial measure till date and since July 2019, the Contractors/Suppliers in particular have had to obtain Bank Guarantee against their assets outside the State. Sadly, those who do not own properties outside the State have been compelled to approach private money-lenders.”

In such a situation, can the people of Nagaland move forward? Can Banks and Financial Institutions (Fls) in the State survive without providing loans to its customers? Is it not affecting the economy of the State? Zeliang questioned.

It is worth mentioning here that when there is no Official Notification/Order from the State Government, why have the Banks stopped financing residential commercial, the letter stated.

“If your Government is of the view that the SARFAESI Act, 2002 infringes upon Article-371 (A) and such Act is not applicable in the State, the matter should have been referred to the Select Committee which is a statutory body of the Nagaland Legislative Assembly. The Select Committee can possibly conduct a detail study of the matter and submit its report/recommendations within a stipulated time to the Nagaland Legislative Assembly for discussion and adoption of resolution as per the rule of law. However, in contrary, you have opted to prevent the matter of urgent public importance from being discussed on the floor of the Assembly, the reason of which is best known to you and the Speaker,” Zeliang stated.

It may be recalled that Chief Minister Neiphiu Rio on Thursday made a statement on SARFAESI Act, 2002 on the floor of the House.