President pitches for no mercy to children's rapists 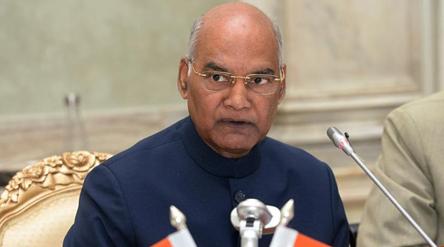 Sirohi (Rajasthan), December 6 (IANS) As the entire nation is outraged at multiple incidents of rape and henious crime against against women, President Ram Nath Kovind on Friday said that there should be no provision of mercy pleas for rapists of children.

In his address at an event here, Kovind said: "Rape convicts under the Protection of Children from Sexual Offences (POCSO) Act should not be allowed mercy petition."

An emotional Kovind went on to add: "There should be no mercy for rapists. These kind of incidents shocked the whole nation."

However, he added: "I am sure you share my sentiments but the final decision on this constitutional amendment lies with the Parliament."

The Parliament amended the POCSO Act in August this year to include the death penalty in cases of gruesome penetrative sexual assault by any accused who happens to be in a position of authority.

The President's suggestion comes against the backdrop of the Union Government forwarding him the Delhi government's recommendation rejecting the mercy plea of one of the four convicts in the 2012 Nirbhaya gang-rape case that shook the conscience of the nation. Meanwhile, Nirbhaya's parents too have filed an application before the President for rejection of mercy pleas of the convicts.

The President was speaking at the inaugural ceremony of National Convention on Social Change from Women Empowerment at the Shantivan complex in Brahma Kumari Ashram, Abu Road.

Stressing that empowerment of women stands significant for the overall development of society, he said that women power has helped India shine on global map. "A large number of women are contributing to the cause of nation, while on the other hand, cruelty with women is increasing in the country," he said.

A lot of work has been done in the direction of protecting women, but much more remains to be done, he added.