TRIFED wants to be ‘window’ for Nagaland products 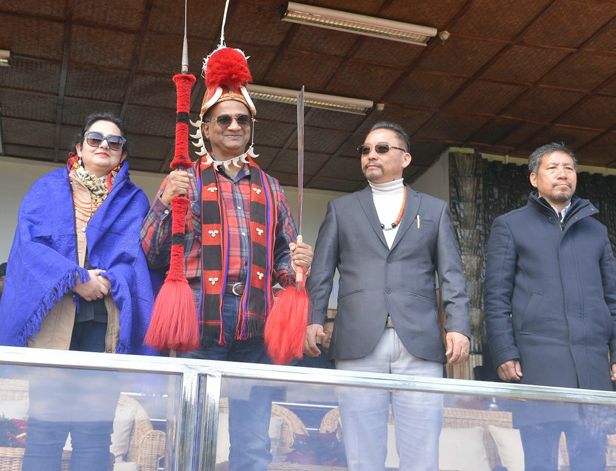 A DIPR report stated that Pravir Krishna, IAS speaking at the event expressed happiness to be part of the festival of festivals and enjoy the music, dances, culture and ethos of tribal life of Nagaland. He said that TRIFED wants to be the window for Nagaland products to the country and the world as the exotic organic products of Nagaland like turmeric, ginger and hand-woven artifacts produced by the local artisan needs to be promoted and marketed.
Krishna announced that a MoU had been signed between the TRIFED and DUDA which will assist in marketing the various indigenous products of Nagaland across the country and the world.

Highlighting the Van Dhan scheme which means ‘wealth of the village’ he remarked that TRIFED believes that the wealth of forest should belong to the people who live in the forest.  He said that a group of 300 tribal SHGs were trained and provided grant to produce value added products and market them to the world, and that the organic products of Nagaland too should find good value in the international market.

Krishna said that the Van Dhan wants to set up at least 100 self help groups in Nagaland. He assured that the farmers, artesian and master craftsmen of Nagaland will get the best prices in the market across the country and the world.

Earlier the honoured guest was felicitated by Advisor Tourism, H Khehovi Yepthomi with traditional spear and head gear. The host for the morning cultural event was Advisor Department of Underdeveloped Areas, Bongkhao Konyak.