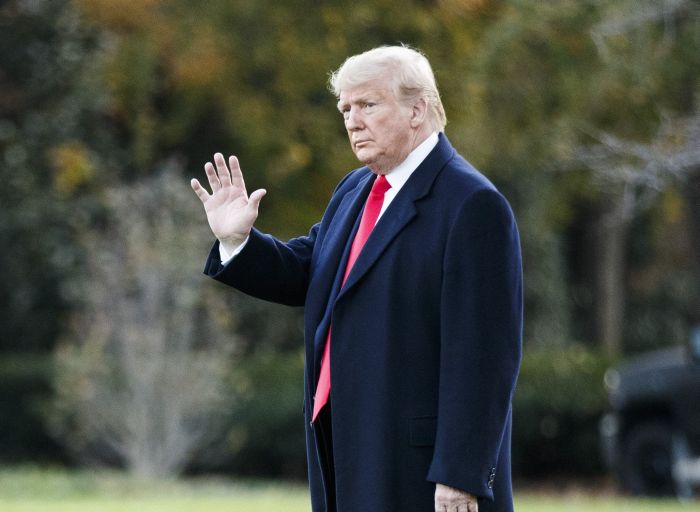 Washington, November 9 (IANS) US President Donald Trump has said that there should be no public hearings during the House of Representatives' impeachment inquiry against him, and directed White House Chief of Staff Mick Mulvaney not to appear before the committees investigating Trump's phone call to Ukraine.

"They shouldn't be having public hearings. This is a hoax," Trump said in a statement to the media on Friday before leaving on a trip to Georgia.

That comment was in contrast to the stand usually taken by the President's allies, who up to now have complained about the lack of transparency in the investigations behind closed doors conducted by committees of the lower house, Efe news reported

The first televised testimonies are slated to begin on November 13.

The committees, headed by the Democrats, are investigating whether Trump committed abuse of power by pressuring the Ukrainian government into investigating one of his political rivals, former Vice President Joe Biden, and the business dealings of his son Hunter with the Ukrainian gas company Burisma.

After almost a month of calling for greater transparency in the inquiry, the White House changed its strategy this week by prohibiting several of its officials from even testifying behind closed doors before the lower house committees.

This Friday it was Mulvaney's turn to testify, but his attorney waited until the last minute before his deposition was scheduled to start and then informed the members of Congress that the Acting White House Chief of Staff was defying the subpoena and would not attend, in line with the "absolute immunity" principle for the President's advisers.

Trump later defended his decision to block Mulvaney's appearance, and refused to speak about whether stopping witnesses from testifying could lead to a charge of "obstruction of Congress".

"I don't want to give credibility to a corrupt witch hunt," Trump said.

The President added that he was "not concerned" about what has been discovered up to now in the transcripts of closed-door testimonies that the committees have published.

Trump also said he wass thinking about revealing information from a first telephone call he had last April with Ukrainian President Volodymyr Zelensky.

"I will give it if they (the Democrats) want it. I don't like doing it because it's such a bad precedent," Trump said.

In September, the White House published a transcript of Trump's July telephone conversation with Zelensky, during which he asked several times that his government investigate Biden, an incident that sparked the Democratic inquiry that could lead to the impeachment of the US president.