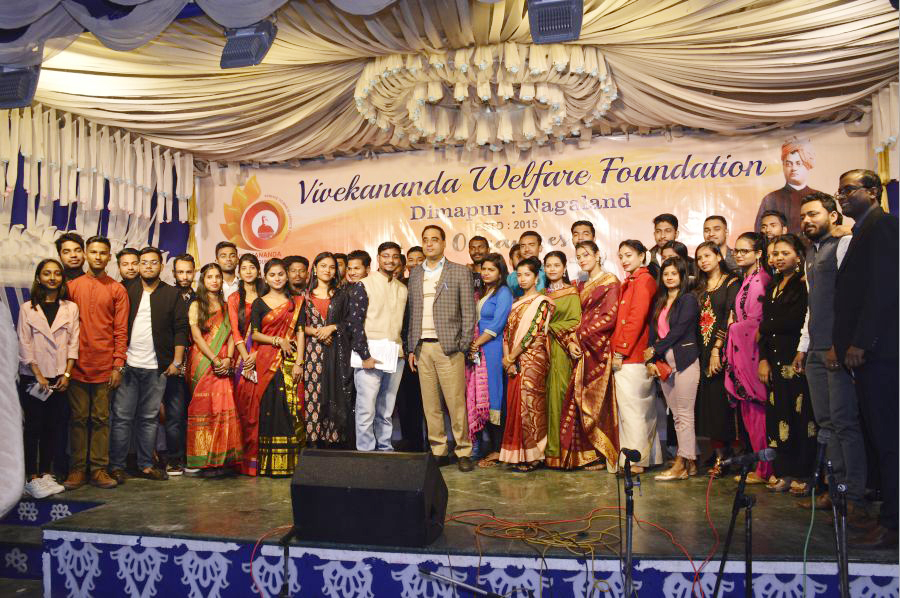 As per a press release from Niranjan Saha, Founder and Chief Functionary, VWF Dimapur, the Foundation was established on January 12, 2015 which completes 5 years of charitable services and philanthropic activities towards Humanity.

The day was observed by distributing fruits and juice to all the patients of Dimapur District Hospital (Civil Hospital), Dimapur.

Special guest on the occasion was Anoop Khinchi IAS , Deputy Commissioner of Dimapur, while the guest of honor was Swadesh Ranjan Goswami from Kolkata, National Addl Secretary General of Bharat Vikas Parishad.

The meeting was chaired by Abhijit Bhattacharjee, Sr Adviser of VWF. Ceremonial lighting of the lamp was held and floral tribute was offered to the portrait of Swami by the chief guest and other dignitaries.

The programme began with a song by the members of VWF youth wing. President, VWF Niranjan Saha read out the welcome address. Tripty Sharma of Living Stone Foundation International, Dimapur and Sangrila Majumder, Pranabananda Women's College gave short speeches. Ripesh Roy recited a poem while classical dance performance was presented by Reya Dey. Other performances were held by other students.

Short speeches were also given by Rajkumar Chowdhury, Patron of VWF and Arup Dasgupta, executive member of VWF. Guest of honor, Goswami narrated the importance of National Youth Day, while the chief guest dwelt upon the teachings of Swami and his advice to the youth of the country.