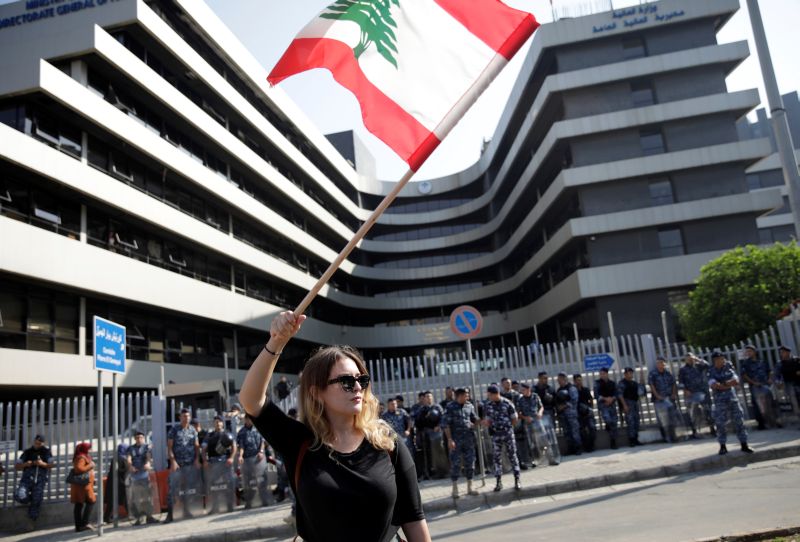 A woman waves a national flag as police officers stand guard during ongoing anti-government protests near the directorate general of finance building in Beirut, Lebanon on November 6, 2019. (REUTERS Photo)

BEIRUT, November 7 (Reuters): The World Bank said on Wednesday it stood ready to back a new Lebanese government, warning the country had no time to waste to tackle an emerging economic crisis worsening by the day.

The bank called for the rapid formation of a new cabinet and said it expected a recession in 2019 to be even more significant than an earlier projection of a 0.2% contraction in the economy.

A wave of massive protests across Lebanon against the ruling elite pushed Prime Minister Saad al-Hariri to resign last week, toppling his coalition cabinet. There has been no sign of progress towards agreeing a new government.

The turmoil comes as Lebanon grapples with the worst economic and financial strains since the 1975-90 civil war.

The World Bank is among foreign donors who pledged billions of dollars in badly needed aid last year, as long as Lebanon's government enacts reforms it has long delayed. But with foreign allies not fully convinced, the money has yet to flow into the economy.

"Lebanon does not have the luxury of time to waste to redress issues that need immediate attention," the World Bank said in a statement after its regional director, Saroj Kumar Jha, met Lebanese President Michel Aoun on Wednesday. "There is an urgent need to stop the emerging economic crisis."

"We stand ready to extend all possible support to the new government that commits itself to good governance and creating opportunities for all Lebanese," it added.

The proportion of Lebanese living in poverty could rise to 50% if economic conditions worsen, from about a third in 2018, the World Bank said. Unemployment, which already runs at 37% for the under 35s, could rise sharply.

"With every passing day, the situation is becoming more acute and this would make recovery extremely challenging," Jha added.

Aoun told the World Bank the next government would have competent ministers "of good reputation and far from suspicions of corruption", the president's office said after the meeting.

Unrest erupted across Lebanon some three weeks ago amid a build-up of anger at rising costs of living, new tax plans and a ruling elite accused of rampant corruption.

Demonstrators blame the political class, many of them sectarian civil war leaders, for plunging the country towards collapse after milking the state for decades.

Hariri, who is aligned with Western and Gulf Arab states, remains in office in a caretaker capacity until political parties agree a new government.

Aoun, an ally of the powerful, Iran-backed Hezbollah movement, has yet to begin official talks with MPs to designate a prime minister who would form the next cabinet.

Crowds protested in front of ministries and state institutions on Wednesday in the capital Beirut, as well as parts of south and north Lebanon.

"We came to show that we're in the protest squares no matter what the corrupt (authorities) do," Rasha Hijazi, a public school teacher, said at a protest in the southern city of Sidon, where teachers and students went on strike.

"It is not important to lose our hours, our archaic curriculum...This is the real revolution that we are teaching."

Lebanon has one of the world's highest public debt burdens at 150% of GDP. Political disputes in Lebanon and regional conflict have hit economic growth.

With growth around zero percent, a slowdown in capital inflows has led to a scarcity of dollars and pressure on the pegged Lebanese pound.

Moody's Investors Service downgraded Lebanon's rating to Caa2 on Tuesday, at the lower end of the "junk" grade bracket, citing the increased likelihood of a debt rescheduling it would classify as a default.