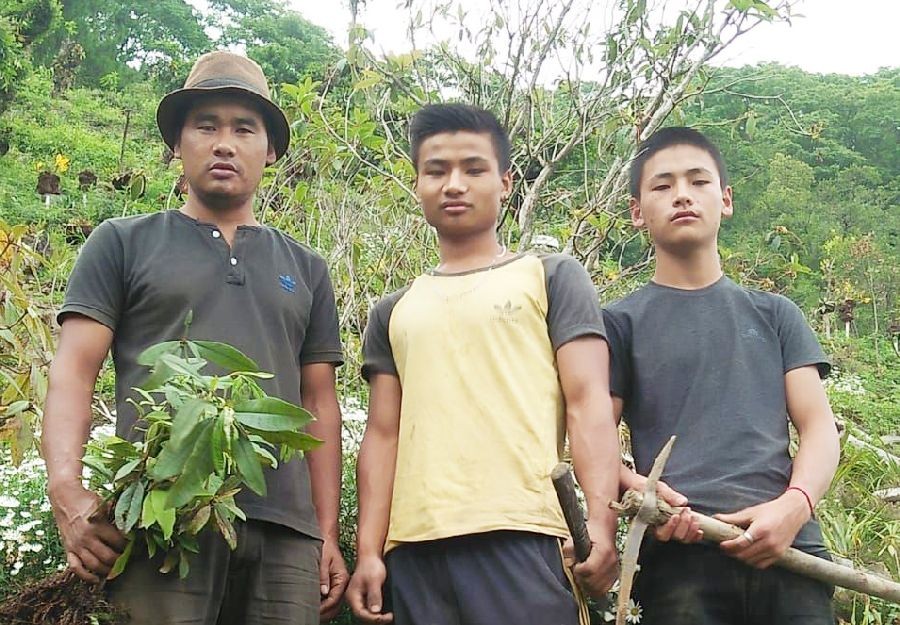 The three brothers against the backdrop of a 10 year old rhododendron tree, which was planted when Dr. Kelühol Tase was pursuing his graduation.
Morung Exclusive
5th June 2020

“For many, World Environment Day is only June 5, but for us, it is throughout the year”, says Medolekho Tase, one of the three brothers from Jakhama, who are trying to conserve the endangered species of Rhododendron tree. Rhododendron is the state flower of Nagaland and the world’s tallest Rhododendron tree, measuring 108 feet was also discovered at Mount Japfü in 1993.

The three brothers—Dr Kelühol Tase, Medolekho Tase and Sweyiekhüto Tase are set to complete planting 1,000 rhododendron saplings by June 5. A total of 800 saplings have already been planted till June 2 this year, an activity that has been undertaken since the second week of May.

“From the 500 trees planted last year, around 50 rhododendron plants were in full bloom this year”, Dr. Kelühol Tase elatedly expresses in an interview with The Morung Express. Stating that they are mostly white in colour, he goes on to say that “even white has 4 categories wherein they bloom at different times of the year.” In June and July, he is looking forward to see yellow and red rhododendrons in bloom.

Dr. Kelühol Tase grew up loving rhododendrons as a child. He recalls accompanying his parents to potato fields that were located along the path to the Dzükou valley, and he would witness the flowers in striking colours. The saplings for the plantation of the 1,500 rhododendron trees were also obtained from the Dzükou and Japfü range with the brothers making at least 10 trips to get enough saplings for the current year.

By 8:30 am in the morning, they head to the Rhododendron Park with their tools and usually return around 6:00 pm. Dr. Kelühol Tase was previously teaching in a college but quit his job to pursue a greater interest of growing rhododendrons, which he has been doing more vigorously since 2009. “Today, even with our educational degrees, many are still unaware of climate change. It’s already affecting us and before it’s too late, we have to take positive steps, and that has to come from each and every one of us”, he puts across.

“People in my village know that once these trees grow, there can be more water tapping for the terrace fields below,” he says. Acknowledging that their labour takes a long time bear fruit, Tase says: “I am happy and satisfied doing something not only for myself but for the society as well.”

“We have been talking about the environment, but rather than talking, we have to start taking actions that will have a positive impact in the near future”, he adds.

Amid the COVID-19 lockdown, their farming activities also came with its set of challenges. “We were trying to construct some footpaths in the park, but because of the lockdown, we couldn’t get the material and labour, and the biggest challenge was getting refreshments with shops being closed”, he reveals.

The three brothers occasionally hire 2-3 people to assist them as they did in the case of bringing saplings and planting, and prior to that clearing the area of weeds and unwanted plants. During the dry season, they make use of a few spring water areas they have in the farm and having connected them with water pipes, they water the plants every evening.

Tase meanwhile informs that they received a lot of support when they planted 500 rhododendron saplings last year. “It kept us moving towards our goal.” He further expresses gratitude to the Chief Minister of Nagaland, whose office sent the SDO to congratulate them on his behalf. He says it has inspired them to keep going forward.

Meanwhile, his younger brother, Sweyiekh­üto Tase expresses, “working with my brothers, I have learned that we need to plant more trees to have clean air and water.”