ABOUT US: The New Sound of Rock Music

ABOUT US might be the band to bring a ‘rocking’ change in the music scene of Nagaland. The band’s latest project came as a ‘treat’ for rock and metal music fans with many hailing it as a ‘revival’ of rock music in the State.

ABOUT US marked their entry into the music scene with the release of their first audio titled ‘Loaded Love’ on December 21, 2020. With just the visual of a photograph of the six band members, the song managed to grab some attention and gave them a considerable fan base. But it did not quite break the ceiling.

Fast forward to four months later, the band became the talk of every social media platform and music circle- even nationally and internationally.

On April 28, 2021 ABOUT US dropped their first video project called ‘Gimme Gimme’. In tune with the catchy title, within few hours the song garnered so much attention that it went viral. In just ten days time, the band’s YouTube channel subscription shot up from 2k to over 11k.

Who are these budding rockers? Let’s get to know ABOUT US as they share their story with The Morung Express in an exclusive interview.

“ABOUT US is a Nagaland based hard rock band,” K Edward Ngullie, manager and songwriter of the band tells The Morung Express.

“We are an experimental hard rock musical band. We come from varied profession- government officials, entrepreneurs, educationist and social worker,” the band manger said after introducing the band members and the lineup - Sochan Kikon in the vocals, Renlamo and Ponn on the guitars, Soren on bass, Lich Kithan on drums and Renbomo on the keyboard.

Addressing curiosity behind the origin of the band’s name, Ngullie elaborates, “Music brings us all together. We wanted to come up with a name which would be relevant not only to the band members but to everyone, ‘a sense of togetherness’. So you see it is not about me or about you. It is about all of us, hence ABOUT US.”

For the band, November 2019 is a landmark period. “You know, years of playing covers in different bands and projects led to the realization for creative venture. We all enjoy playing covers, but then again, we were intrigue, inspired and motivated to explore our creative instinct.”

In a sentence they describe their music as “basically experimental in nature with a core concept of hard rock.”

Taking the road of the creative process is the most important hub for any production. For ABOUT US, Ngullie said, “Our music is reflection on the inspiration we derive from each other. Members of the band come up with materials and we sit together and deliberate.”

“Generally speaking, ‘passion’ for music and the joy it brings, is inspirational in itself,” he says in response to the question of the biggest influence or inspiration for their music.

The band also shares that all the positive reception and admiration has been made possible as they held on to “hard work and self discipline” as their core values and principles as musicians.

It has not been challenge-free for the band. Like any other group or band, ABOUT US also deals with the challenge of finding the balance. “Balancing our professional and personal lives with that of the band’s projects is quite challenging. But, we slowly are coming in sync with it.”

The band also does not want to stop their journey with just the two recent releases. They have plans for the future.

“Presently, we are working on our self-titled debut album, which is likely to be completed in a month or so (hopefully),” Ngullie says and adds, “Once it is done we will definitely follow it up with promotional tours provided that the pandemic situation is stable and normalized.”

The band feels that the music scene in Nagaland looks ‘promising and positive’.

“It is a joy listening to various artist and genres that our talented Naga musicians are coming up with, at the same time, the proactive role of our State Government through the Task Force for Music and Arts is encouraging,” they note.

If the band could change anything about the music industry in Nagaland, it is “making music sustainable.”

The band observes that currently, we are yet to witness artist who solely depend on their musical earnings for livelihood.

“Therefore, if policies can be made to make music sustainable, more people will be interested in the industry and opt for it as a viable career choice,” Ngullie adds.

Finally, offering a word of guidance for those wanting to follow in their footsteps, the band conveys, “Never give up. Believe in yourself and keep your dream alive, take chances and create your own beautiful story.”

Readers and fans can look forward to more from ABOUT US as the band reveals that they are yet to experience the “biggest turning point as a band.”

With a musical dream to share the love and music with the world, ABOUT US is here to “leave their rock and roll legacy for the younger generations.” 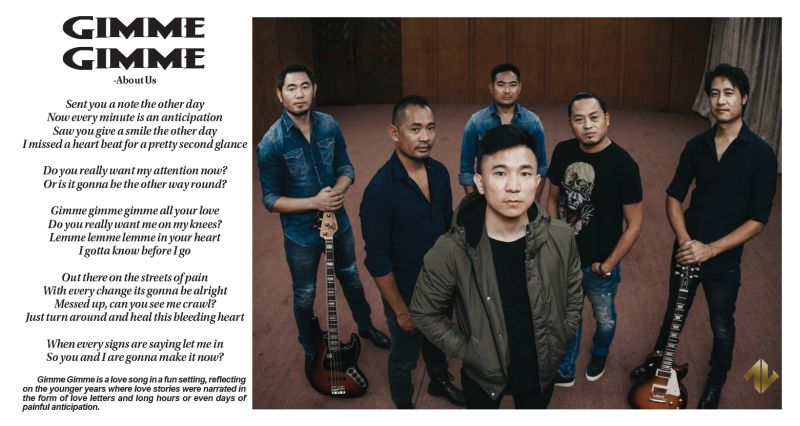