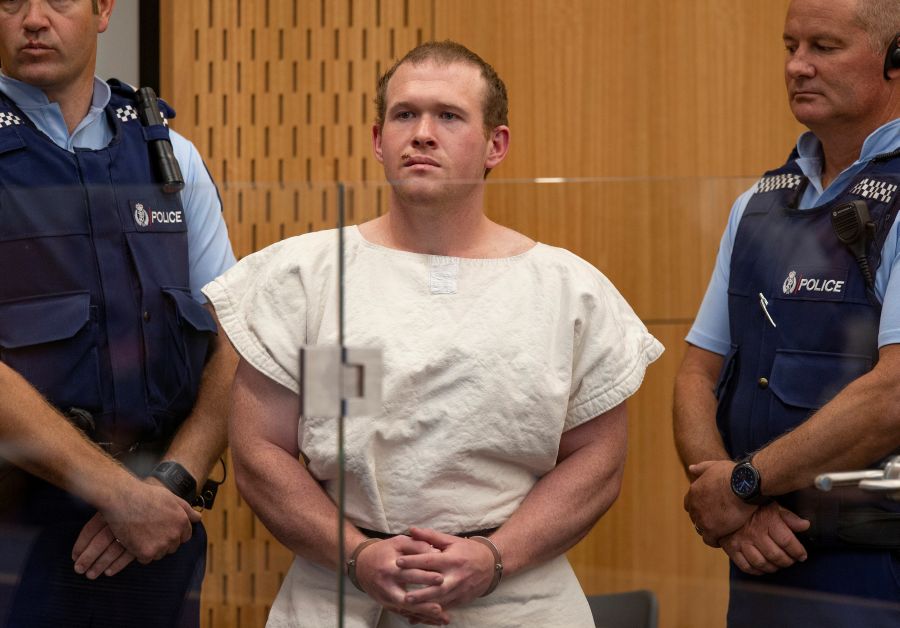 Brenton Tarrant, charged for murder in relation to the mosque attacks, is seen in the dock during his appearance in the Christchurch District Court, New Zealand on March 16, 2019. (REUTERS File Photo)

Brenton Tarrant, who appeared by video link, admitted to 51 charges of murder, 40 charges of attempted murder and one charge of committing a terrorist act in a hastily called Christchurch High Court hearing.

"He has been convicted of each and every one of those charges," presiding judge Justice Cameron Mander said in minutes of the hearing released by the court.

"The entry of guilty pleas represents a very significant step towards bringing finality to this criminal proceeding."

Tarrant has been in police custody since March 15, 2019, when he was arrested and accused of using semi-automatic weapons to target Muslims attending Friday prayers at two mosques in Christchurch. The attack was streamed live on Facebook.

Tarrant's guilty plea makes a six-week trial that was due to begin in June redundant. The court will instead move directly to sentencing Tarrant on all 92 charges. It did not provide a date for that sentencing and Tarrant was remanded in custody until May 1.

Prime Minister Jacinda Ardern, who has stuck by a pledge to not name the gunman in public, said she let out "a massive sigh of relief" when she heard of the guilty pleas.

"The whole nation, but particularly the Muslim community, has been spared a trial that could have acted as a platform," Ardern said.

Aarif Rasheed, a lawyer working with some victim families, said they were not given any indication of why Tarrant changed his pleas from not guilty.

"Any possible explanations are speculative but we do know terrorists are often seeking a sense of self-importance and attention to their cause," Rasheed said. "The COVID-19 pandemic has removed that."

Tarrant, who faces a lifetime prison sentence, had posted a "manifesto" on social media ahead of the attack that called immigrants "invaders" and referred to "white genocide", a term used by white supremacists to describe the growth of minority populations.

Tarrant's lawyers did not respond to a request for comment.

Due to a nationwide lockdown in place for the coronavirus outbreak, Thursday's court hearing took place with just 17 people in the courtroom, including an Imam for each of the two mosques attacked.

Sheikh Hasan Rubel, 35, who survived from the attack despite being shot three times, said the guilty pleas brought both surprise and relief.

"Whenever I thought about the court proceedings it used to affect me mentally, and I did not want to re-live all of it," he told Reuters over the phone.

"Now I feel quite relieved. We had faith in New Zealand's legal system and I was sure he will get whatever he deserves."

Farid Ahmed, whose wife was killed at the Al Noor mosque, said the guilty plea was the courageous and right thing to do.

"His heart has realised what is right and he has admitted his guilt," Farid said.

"That would save him from more emotional and mental trauma, and the rest of country's time and efforts," he added. "For Muslim community, it wold save them from going through the court process and refreshing memories of this tragedy."

The court placed a one-hour embargo on reporting the news in order to inform family members and victims about what had taken place before it was made public.