COVID -19: How prepared is Nagaland? 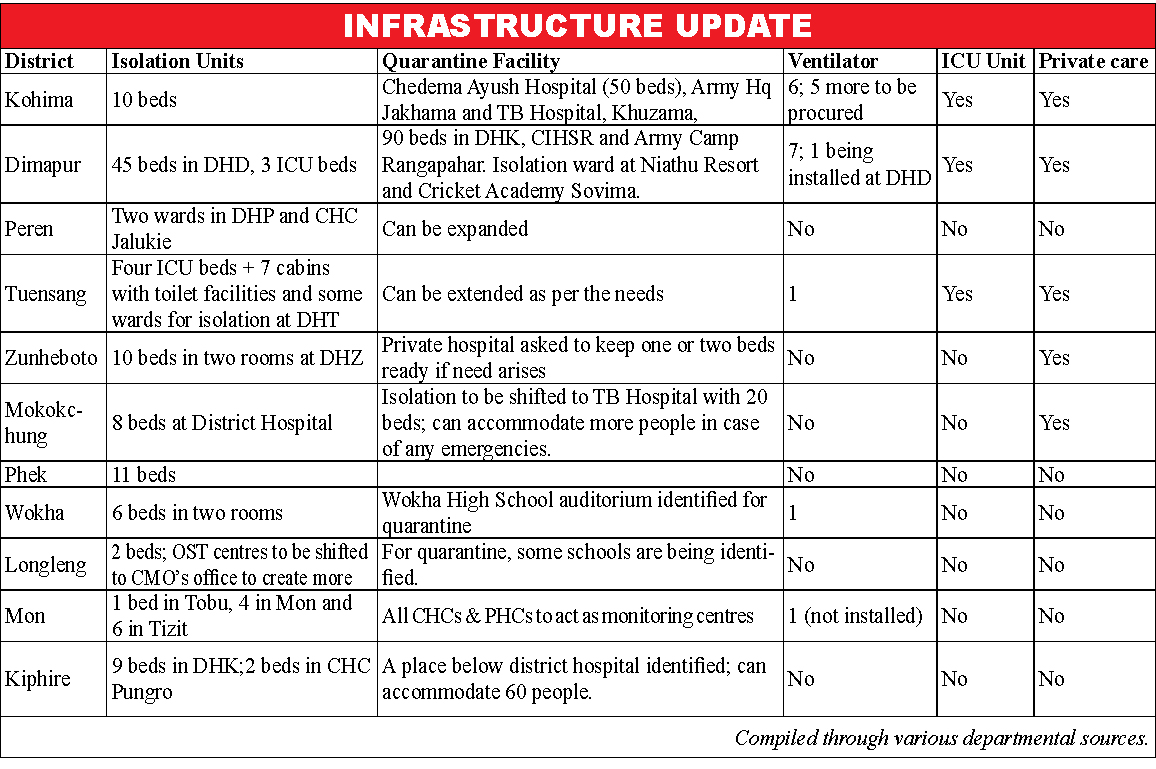 The global COVID-19 outbreak has caught most health systems across the world- including the Nagaland health sector- ill-prepared on various fronts viz. infrastructure, equipment, treatment etc.

Despite this, medical personnel are doing their best to prepare themselves for any exigencies that may arise.
The Morung Express got in touch with health officials across the state to find out the existing infrastructure and preparedness status of each district.

Are there enough ventilators?
While there has not been a single positive case reported from the state, as far as the health infrastructure goes, the state appears to be ill equipped to deal with a possible outbreak.

According to the Department of Health and Family Welfare statistics, as on March 25, the state has prepared at least 171 beds in isolation wards and quarantine facilities spread across the districts. However, ground reports reveal that there are currently only 15 functional ventilators in the entire state.

While a ventilator does not cure COVID-19, it is crucial in the treatment of the disease as it helps support lung function in COVID -19 patients.

Naga Hospital Authority Kohima which has been designated as sample collection centre for testing has 3 ventilators at present. However, an official from NHAK said the ICU cannot be used for COVID-19 patients, as it may pose serious health hazards to other admitted patients.

NHAK Managing Director Dr Thorhusie Katiry informed that the hospital has asked for five more ventilators from the Department but has not received them yet.

Only 4 districts with private hospitals
More gaps in the State’s health infrastructure appeared as ground reports revealed that only four districts in the state had access to private health care.

According to health officials in Kohima, private hospitals have been requested to reserve certain beds and spaces if need arises. However, the authority is yet to receive any response from the latter citing some difficulties. Officials in Dimapur are in the process of identifying more beds and spaces in different pockets of the town.

In Zunheboto, the lone private hospital has been asked to keep one or two beds ready should the need arise, while Mokokchung has no such arrangements.

The rest of the districts have no private hospitals except for a small private clinic in Tuensang town.

Safety of frontline workers
Rapid Response Teams and District Task Forces for Novel Corona Virus that were constituted in all the districts have been undergoing training and awareness programmes that are focused on preventing the outbreak of COVID-19 in the state.
However, a commonality observed in most of the districts was the shortage of Personal Protective Equipment (PPE) like N95 face masks, hazmat suits, gloves and other protective gear.

Mokokchung Chief Medical Officer Dr Chubala Aier informed that while there is “normal supply” of oxygen tanks for the district, it might run short of it in the event of a COVID-19 outbreak.

Arrangements have also been made for procuring protective gear for healthcare workers, however, delivery has been delayed due to glitches in the transport sector, she added.

Mon administration officials also informed of shortage of PPE for medical personnel and absence of hazmat suits in the district.  Similar problems were reported in Zunheboto and Tuensang.

In Longleng, it was informed that toilet facilities in the isolation wards are still under construction.

Are we really ready?

While officials in Kohima made no mention of equipment shortages, on Wednesday anxious civil society organizations, namely the Southern Angami Youth Organisation (SAYO) blocked off the NH 29 at Khuzama Police Check Gate under Kohima district on the grounds that the “Government of Nagaland has failed to provide medical team, medical equipments and facilities” at the Check Gate.

Subsequently, a meeting between representatives of SAYO, the Southern Angami Public Organization (SAPO) and SDO Civil Jakhama was held where it was agreed that the blockade would be lifted for on conditions that the administration would ensure the provision of all necessary equipment required for the protection of the public as well as frontline workers.
Khuzama village shares its boundary with the state of Manipur where the first case of COVID-19 infection in the North-east region was confirmed.

While the matter has since been ‘resolved’ a closer look into the incident at Khuzama today casts doubt on the ‘preparedness’ of the state in handling a possible outbreak.

This points to the possibility that the state might not have the capacity to handle an outbreak on the scale that other states in India has seen. While only a fraction would get sick if it spreads in a community, the absolute number of persons who need care would be large. The best bet for the state government would be in preventing such an outcome.

Meanwhile, the best option for citizens would be to hunker down and follow all guidelines issued by the state government.