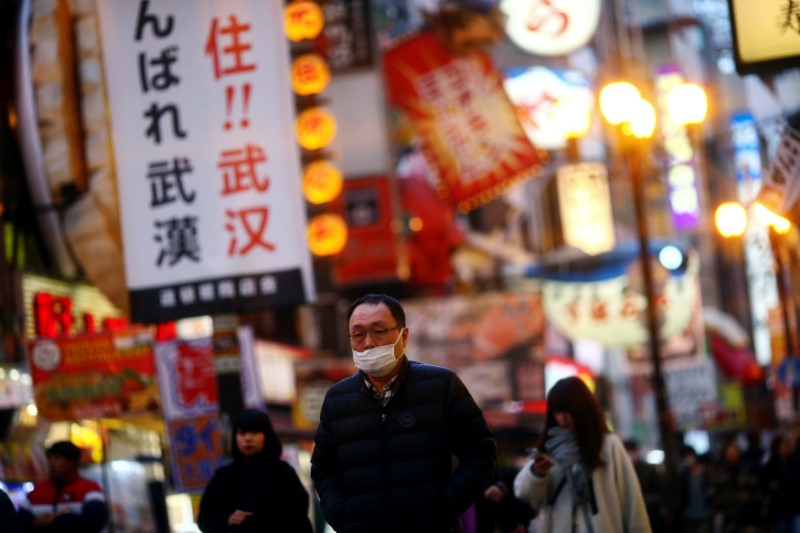 A man, wearing protective mask following an outbreak of the coronavirus disease (COVID-19), walks on an almost empty street in the Dotonbori entertainment district of Osaka, Japan on March 14, 2020. (REUTERS File Photo)

TOKYO, March 26 (Reuters): Japan banned entry from Europe on Thursday and warned of a high risk the coronavirus would become rampant after a surge in Tokyo, setting up a task force - a step towards a possible state of emergency - though the government said none was yet planned.

"In order to overcome what can be described as a national crisis, it is necessary for the state, local governments, medical community, and the people to act as one and press ahead with measures against coronavirus infections," Prime Minister Shinzo Abe said at a task force meeting.

He announced a ban on entry from 21 European countries and Iran, to begin from Friday. Abe said he had launched the task force under a recently revised law, after receiving a report that the chance the virus would spread widely were high.

Public broadcaster NHK said 47 new cases were reported in the capital Tokyo on Thursday. Authorities are worried that a jump in cases in the capital in recent days means Japan, which has so far escaped the sort of mass spread that has hit Europe and North America, could now be on course for a big new wave.

As of Thursday evening, Japan had 1,369 domestic cases of coronavirus, as well as 712 from a cruise ship docked near Tokyo last month, according to NHK tallies. There have been 46 domestic deaths and 10 from the cruise ship.

Japan was an early focus of the coronavirus outbreak, with the cruise ship initially the biggest source of infections outside China. But it has so far averted the mass community spread that has forced Europe and North America to grapple with thousands of new cases per day.

A rise in cases from sources that cannot be traced now has many Japanese expecting the government to announce a state of emergency, giving local authorities legal basis to ask residents and businesses to restrict movement and work. Nishimura, the economy minister, said no such declaration is planned for now.

Under a law revised this month to cover the coronavirus, the prime minister can declare a state of emergency if the disease poses a "grave danger" to lives and if its rapid spread threatens serious economic damage.

Japan was already teetering on the brink of before the virus struck. On Thursday, the government offered its bleakest assessment on the economy in nearly seven years, saying conditions in March were "severe".

A state of emergency would allow governors in hard-hit Japanese regions to take steps similar to those taken in Europe and U.S. states, such as asking people to stay home, closing schools and other public facilities and cancelling large events. It does not give powers to impose penalties for ignoring such requests in most cases.

Hitachi Ltd instructed 50,000 employees at its group companies in Tokyo to work from home and avoid unnecessary outings.

A landmark department store in Tokyo's Shibuya district - popular with young people, many of whom have continued to go out to play and shop - said it would close on the weekend. Toho Cinemas also said it would close its movie theatres in Tokyo and nearby Kanagawa prefecture on Saturday and Sunday.

On Wednesday, Tokyo Governor Yuriko Koike warned of the risk of an explosive rise in infections in the capital and asked residents to avoid non-essential outings through April 12, especially over the weekend. She repeated her call on Thursday.

Koike was to meet Abe later on Thursday. Koike has asked the neighbouring prefectures of Saitama, Chiba and Kanagawa to ask their residents to refrain from non-urgent, non-essential travel to Tokyo, the Nikkei business daily reported. The governor of Kanagawa later asked residents to stay at home this weekend.

"The government and local authorities will cooperate based on the awareness that this is a very critical time to prevent the spread of the virus," Chief Cabinet Secretary Yosihide Suga told a news conference.

Suga later said the risk of the infection spreading was high, but there was no need to change a plan to reopen schools in early April. Many closed earlier this month at Abe's request.

The International Olympic Committee and the government on Tuesday agreed to put back the Tokyo 2020 Olympics by a year.

If an emergency is declared, enforcement provisions will still be weak. "For better or worse, no police at our doors," said Kenji Shibuya, director of the Institute of Population Health at King's College, London.

On a sunny three-day break last weekend, crowds of people were out in Tokyo despite bans in some areas on picnics for the traditional spring "hanami" cherry-blossom viewing. On Thursday, tabloids blared “Tokyo Lockdown Panic” and “Tokyo Destruction".

But a long line of people waited at a chocolate croissant cafe in Tokyo for lunch, while subways were packed and people lined up before drug stores opened to buy masks and sanitary products that are in short supply.