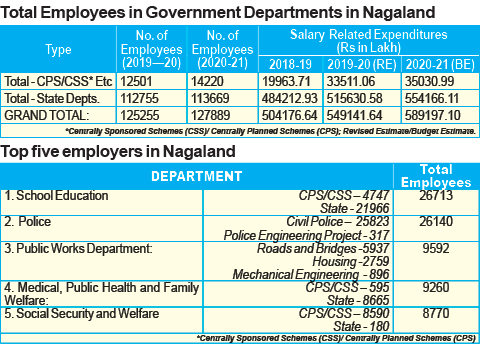 A total of 1,27,889 employees are under the Nagaland State Government’s payroll, with an addition of 2,634 in the last one year, according to official statements laid at the recently concluded 5th Session of 13th Nagaland Legislative Assembly (NLA).  There were 1,25,255 employees in 2019-20.

However, out of the total increase in employment, 1,719 were appointed in the current year under Centrally Sponsored Schemes (CSS)/ Centrally Planned Schemes (CPS) etc while the rest (935) were in different State Departments.

Overall, out of the 1,27,889 employees, 1,13,669 were under State Departments and the rest – 14,220, under CPS/CSS, informed the ‘Statements under The Nagaland Fiscal Responsibility and Budget Management Act, 2005' prepared by the State’s Finance Department.

It was laid in the Assembly along with the general Budget 2020-21 by the Chief Minister Neiphiu Rio on February 13.

However, since the expenditure under CSS/CPS is included as development expenditure in the budget, State’s own expenses on salary is estimated at Rs 5,54,166.11 lakh (Rs 5,541.66 crore) or 63.68% of the total non-plan expenditure.

The Public Works Department, including Roads and Bridges (5,937), Housing (2,759) and Mechanical Engineering (896) is in the third position with combine total of 9592 employees.

Medical, Public Health and Family Welfare (9,260) and Social Security and Welfare are the other two departments in top five.

With just 21 individuals, Land Revenue Department had least number of employees.  Border Affairs and Nagaland Information Commission were in 2nd and 3rd from the bottom with 22 and 41 employees respectively.