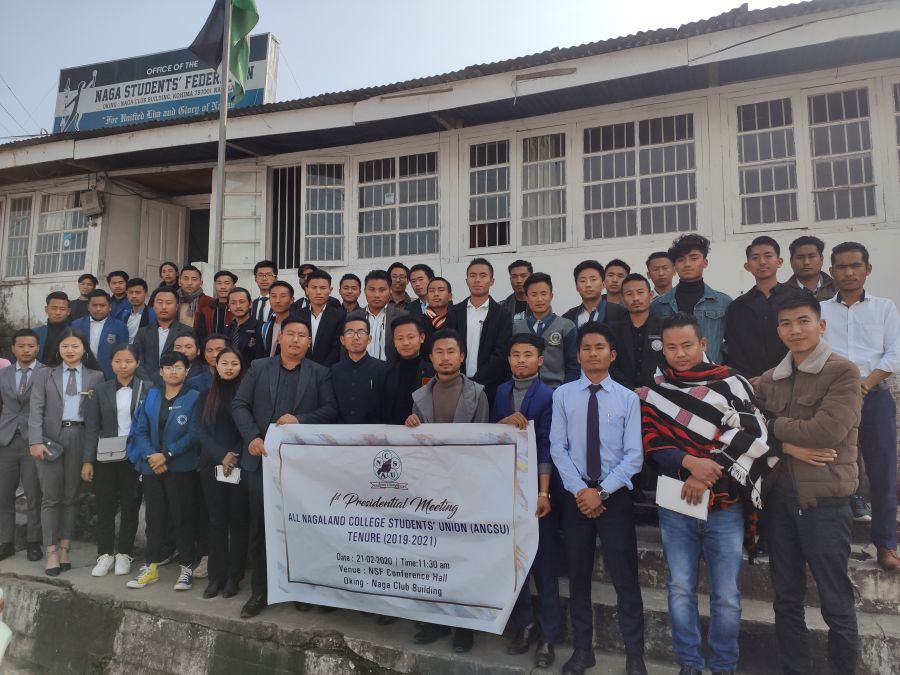 ANCSU members after the union's presidential meeting in Kohima on February 21.

Dimapur, February 21 (MExN):  Following its first Presidential meeting in Kohima on February 21, the All Nagaland College Students’ Union (ANCSU) has served a 40-day ultimatum to the Chief Minister and Minister, Higher and Technical Education regarding setting up of nodal cell for scholarships and recruitment of 110 assistant professors, among others.

In its charter of demands, ANCSU demanded that the state government “uphold the assurance and notification for setting up of Common Nodal Cell for all kinds of scholarship schemes which was already notified on, dated October, 25, 2019.” It said that while the students were given hope that the nodal cell would be established soon, the notification for establishment of the cell is yet to be implemented in action.

Another demand was that the state government sends the 110 sanctioned Assistant Professor posts under Higher Education department to the Nagaland Public Service Commission at one go. While a portion of the posts were advertised in the year 2019 and are now kept on hold, the ANCSU demanded that the remaining post be sent to NPSC within a 40-day period.

ANCSU also gave the department 40 days to appoint Principals in all the colleges that are currently functioning without one.

On the long pending issue of land encroachment at Kohima Science College, Jotsoma, and other district colleges, it appealed the state government to call for a joint meeting for settlement with all the stakeholders (college wise) within 30 days.

The ANCSU is hopeful that along with its other charter of demands, the state government would set up the Academic Council for Higher and Technical Education as asked in the memorandum submitted on December 12, 2019, the release added.

ANCSU questioned “the sincerity of the Directorate of Higher Education in regard to the demands of the students’ community,” and said that almost all the colleges are suffering from various problems due to the “incompetency of the department officials.”

The state government should not always wait for the students to protest or agitate but address the matters on priority to avoid any kind of democratic confrontations, the press release stated.