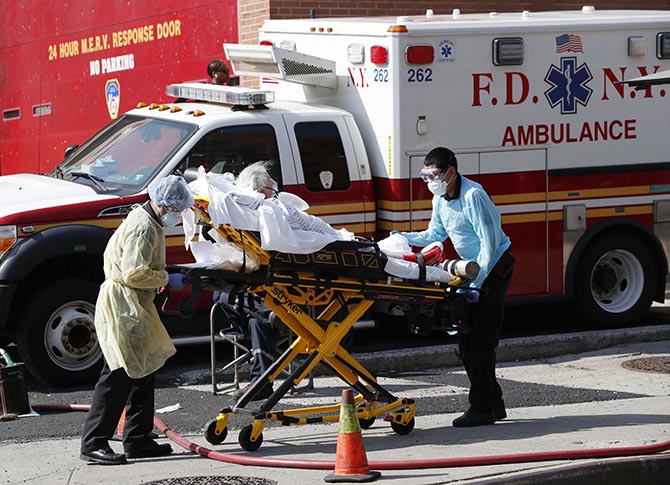 A patient is transferred from Elmhurst Hospital Center to a waiting ambulance during the current coronavirus outbreak, Tuesday, April 7, 2020, in New York. New York Gov. Andrew Cuomo said last week that the city's overtaxed hospitals could move patients to other medical facilities to ease the burden on local hospitals. AP/PTI Photo

April 10 (PTI): The deadly coronavirus pandemic claimed lives of more than 16,000 Americans and infected over 4.6 lakhs of them, devastating the United States economy and rendering a record 16 million workers jobless in just three weeks.

Of this, the New York metropolitan area, comprising the adjoining New Jersey and Connecticut, alone account for more than 9,000 cases and 220,000 cases.

Globally, over 15 lakh people have been infected so far by coronavirus and the fatalities stands at nearly 95,000.

The United States accounts for nearly 30 per cent of the all COVID-19 positive cases and over 17 per cent of all fatalities.

By Thursday, nearly all of America -- 97 percent of the 220 million population -- are under stay-at-home order. US President Donald Trump has notified major disaster declaration for almost all 50 States.

In New York City, which is considered financial capital of the world and has one of the best health facilities, more than 800 deaths were reported in one day alone, taking the fatalities to a record 7,067.

New York Governor Andrew Cumo, however, asserted that COVID-19 now appears to have reached its peak in the city, where the number of new patients to hospitals have started coming down.

Strict enforcement of mitigation measures including maintaining social distancing, he said, is having an impact nationwide.

"As such they now are projecting far less death -- around 60,000 -- due to coronavirus than earlier projections of between one and two lakhs," he said.

"It looks like we're at the lower end of the curb in terms of death, which is a terrible word... a terrible, dark word that we've experienced like nobody's ever seen before in this country. We have numbers that are terrible," Trump told reporters during his daily White House press conference on coronavirus.

"It is, in the sense of deaths, a bad week. In fact, every day there seems to be a record number of deaths compared to the day before. In fact, New York today had again another record of -- I think the city itself had about 820-plus deaths," said Dr Anthony Fauci, Director of the National Institute of Allergy and Infectious Diseases and a lead member of the White House Task Force on Coronavirus.

The deadly disease, which has forced people to stay standstill, has brought the American economy to standstill.

The air flight traffic has dropped by 96 per cent and in just three weeks alone 6.6 million Americans have applied for unemployment benefits, a figure which reflects on the dire straight of the US economy.

The latest unemployment figures reflect that the $2 trillion relief package has not worked so far.

But Trump exuded confidence that the economy is going to bounce back in the coming months.

"What's going to happen is we're going to have a big bounce rather than a small balance. But we will be back and I think, honestly, I think our country is going to be back from an economic standpoint," he said in response to a question.

In an interview webcast by the Brookings Institute, Federal Reserve Chairman Jerome Powell said the country needs to have a plan nationally for reopening the economy.

"We all want it to happen as quickly as possible," he said.

In an interview to CNBC, Treasury Secretary Steven Mnuchin said the economy could be ready to reopen by the end of May as soon as the president feels comfortable with the medical issues.

"We are going to be opening up weekend opening very, very, very, very soon I hope. Together our people are writing one of the most noble chapters in the proud history of our nation," Trump told reporters at the White House.