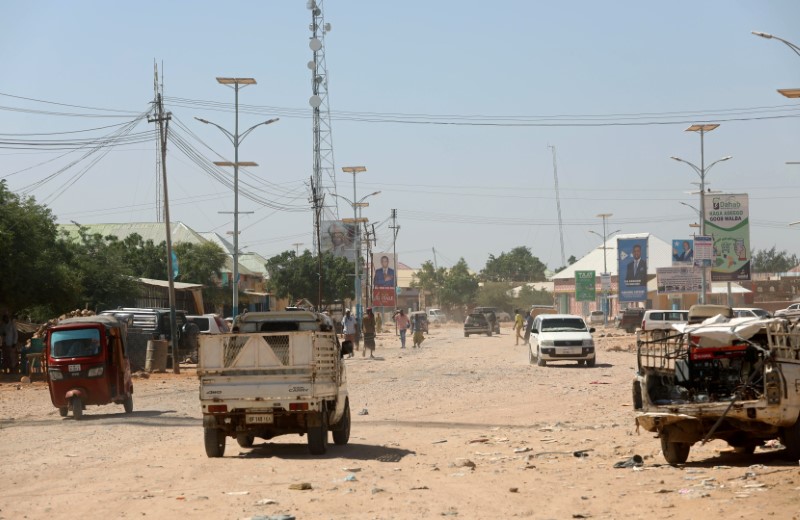 A general view shows traffic along the road in Dhusamareb, administrative capital of Galmudug state, in central Somalia on December 23, 2019. (REUTERS File Photo)

MOGADISHU, March 26 (Reuters): Shattered by decades of war, Somalia can finally look forward to rebuilding normal economic ties with the world after the IMF and World Bank announced it had taken the necessary steps to see most of its $5.2 billion of external debt forgiven.

The decision announced on Wednesday allows the Horn of Africa nation to get badly-needed grants from the World Bank and African Development Bank to combat a locust invasion and floods and strengthen its health system to face the coronavirus, said World Bank country representative Hugh Riddell.

It will also clear the way for Somalia to receive grants as part of over $50 billion in emergency aid being made available by the International Monetary Fund for coronavirus response.

The IMF's executive board also approved Somalia to receive a new three-year financing arrangement worth $395 million.

"This is in the nick of time," Riddell told Reuters. "Without Decision Point, Somalia would not have had access to World Bank money to invest in health systems and pandemic preparedness."

"Decision Point" refers to the agreement between the Fund, the World Bank and the African Development Bank to let Somalia to seek relief under the complex Heavily Indebted Poor Countries (HIPC) Initiative, which could eventually see Somalia's debt reduced to $557 million if it meets targets for good governance.

The move sends a powerful signal to Somalia’s Paris Club creditors, due to meet on March 31. Somali Finance Minister Abdirahman Beileh last month said he hoped they would agree to cancel between 75% to 80% of Somalia's debt, with the rest to be repaid on closely supervised terms over the next few years.

"Reaching Decision Point is the greatest milestone Somalia and its people have achieved for the past 30 years," Prime Minister Hassan Ali Khaire told Reuters.

Getting to Decision Point has taken eight years and Herculean efforts by the Somali government. The military, used to picking up bags of cash from the central bank, is now paying its soldiers directly using a biometric identity system and electronic transfers.

Collecting revenues has been hard. For years, politically-connected cartels controlled the port and airport in Mogadishu, pocketing most of the fees. When the central bank tried to set up an airport kiosk to collect visa fees, Khaire had physically to take bank officials to the airport to make sure it happened.

Now only the Ministry of Finance is authorised to collect revenues, his office said - although illegal roadblocks, corruption and extortion remain common.

"To undertake all these changes you have to go through layers of vested interests who have been benefiting from that system for some many years," he noted drily.

Forcing change in Somalia is difficult - assassinations and bombings are common, and not all by the Islamist al Shabaab insurgency, which killed four people in a suicide bombing on Wednesday. The group wants to overthrow the government and rule using their own strict version of Islamic law.

Somalia, home to 15 million people, is due to hold elections this year although it is unclear if a coronavirus outbreak might affect the timetable. Conflict and disaster have already forced more than 2.6 million Somalis to flee their homes.

IMG Managing Director Kristalina Georgieva said the government needed to continue expanding cooperation with Somalia's federal member states, and should be conservative on future borrowing to avoid "falling back into debt distress".

Jarat Chopra, who previously managed Somalia's debt at the World Bank and subsequently headed the U.N. sanctions monitoring group on Somalia, said the process had been politicized and Somalia had not met the same requirements as other countries.

"There are some greater financial controls but not enough to bring down the level of corruption," he said.