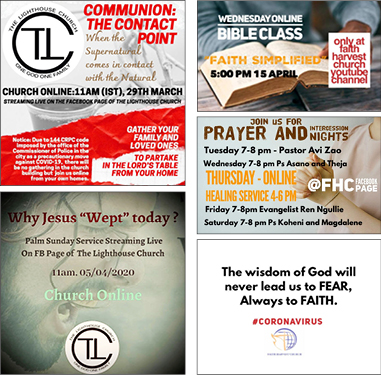 As the world continues to grapple with the COVID-19 pandemic, it has also upended the ministries of the church even as some of them reach out to more people during this time of crisis. Since the lockdown, Faith Harvest Church Kohima alone has reached out to over 2 lakhs of people through their videos and live worship, primarily in the northeast and Nagaland and as well as other parts of India and several countries across the globe.

Pastor Shan Kikon, Faith Harvest Church Kohima told The Morung Express that the first thing they did was reach out to people with the Word of God to instill faith and hope in them, which was done through text messages, sermons and short videos on social media via Facebook and YouTube and also having videos sent to their members.

They further identified the needy in and outside their church, and by now, have extended help to more than 100 families in terms of ration such as rice, dal, eggs, oil, tea, sugar, salt and other commodities. Also knowing that many more would be in need of prayer during this time, the Church provided phone numbers on social media for anyone to call, and have, so far received over 300 requests for prayer for various needs from people outside the church. The calls came in from as far as the Middle East and from across India for needs ranging from healing, provision, fear and even loneliness.

“We have made sure that each of those requests were prayed over individually by a pastor or an evangelist calling them over the phone,” Pastor Shan Kikon stated and further expressed that, “we, the pastoral team have also called up all the members of our church personally to enquire about their condition both physical and spiritual.”

In the meantime, their church youth pastors, children ministry and the Nagamese church are also reaching out to people through videos, live stream and other means. Beyond sharing the word of God, the church had also sent money to feed migrant workers to ministries based in UP, Delhi and Andhra Pradesh through the pastors associated with the church.

“I truly believe during this time, the focus of the prayers of the Naga Churches should not only be a self-focused prayer such as “protect us” and “heal us” but it should also be more importantly, “Lord, use us” and “Lord, cause us to be a blessing,” he affirmed.

Mention may be made here that Faith Harvest Church Kohima was birthed out of a collective hunger and cry for truth and revival, for power and for light in a land desperate for true change wherein its first Sunday services began in the dining room of the old Hotel Fira (now demolished) in August 2000. Pioneered and led by Rev Areni Castro, the ministry was then named as Hope Evangelical Ministry and started with only 5 members. In the year 2002, Pastor Shan Kikon took over as the Pastor of the Ministry, and the name was changed to Faith Harvest Church. The church grew gradually and in a period of a few months, the attendance outgrew the small dining room of the hotel.

Meanwhile, The Lighthouse Church, Dimapur, a non-denominational church, founded in the year 2016 (an initiative of Sinai Ministry which was established in 2006) is also trying to reach out as much as possible through different platforms on social media. Pastor Wabang Longchari said, “Since we are unable to reach out in person, we are trying to encourage and keep ourselves spiritually fed through these platforms by bringing word of faith from the Bible.”

“Since the lockdown, we, as a church family, have been having online fellowship via Zoom every evening from 8:00 pm. We come online, have worship and share and encourage one another, and also pray for the current situation. We also take Communion with the intention of bringing faith and hope to our church members,” he highlighted. “I wish we could do more but because of the lockdown we are unable to do much,” he added regretfully.