To ban or not to ban: Debate on ‘Politics of Food’ continues 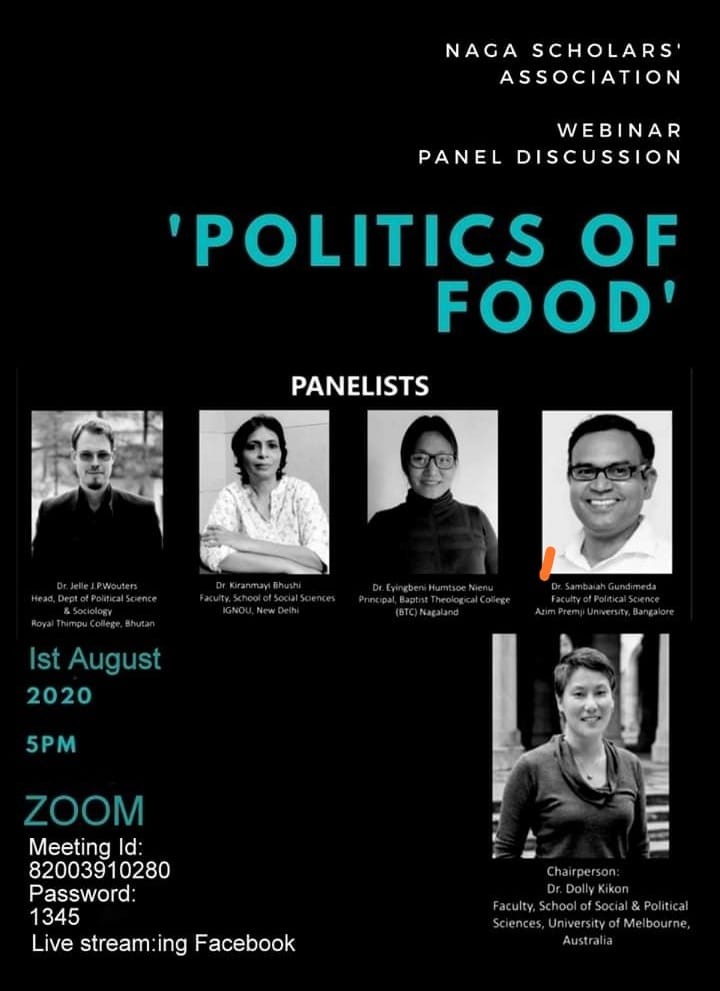 Dr Kiranmayi Bhushi, who has expertise on ‘food and culture’ explained how food mediates every aspects of the society, by narrating her experience of teaching and introducing the topic of food to her students. She highlighted the food politics by throwing some questions, how do we represent a particular region through its cuisine and does it have to be someone else representation? Dr Kiran argued that these representations often have stereotyped connotation. This stereotype essentializes the communities with racist names and labels. She further argued that unless the animal in question is on endangered species, the question of banning the meat of any animal is a highly contentious issue.

Dr Jelle JP Wouters shared his perspective on meat by specifically pointing out the dog meat ban in Nagaland in July 2020. Dr Jelle as an anthropologist pointed at the elemental fact that humans are omnivorous, therefore, it requires both animals and plants for food and the convincing evidence is the teeth we have.

Dr Jelle’s next question was on what animals are legitimate and not legitimate for source of proteins is not one of measured facts but of religion and cultural predictions. Dr Jelle added that while the unprecedented pressure came from elsewhere, in the end the ban was legislated into existence by the Nagaland government. “In doing so, the government entered into the Naga kitchen, which, together with the bedroom, is a sacred space where no government should dare to enter.”

Dr Jelle further stated that the ban of dog meat by government of Nagaland is to be seen or understood as making an apology to the nation for the age-old Naga food habits, an apology for the existence of taste buds that are not deemed ‘Properly Indian’. Dr Jelle, further opined that why there was no need for the Nagaland government to ban dog meat even as activists invoked India’s Prevention of cruelty to Animals Act, because Article 371A gave the Nagas the right to preserve their social practice and customs. This also put a question on whether the government of Nagaland has truly understood the special power that is given in Article 371A.

Dr Sambaiah Gundimeda, a political scientist opened his arguments by mentioning that the ban on commercialization and import of dog and sale of dog meat cannot be seen as an isolate event that took place in Nagaland but see from many different angles. In response to one of the questions, Dr Sambaiah highlighted that the politics in the imposition of ‘taste’ into the multi-fabric by some people in power is something to be deeply concerned and watchful.

Dr Eyingbeni argued against the ban of the commercialization of dog and its meat by the Nagaland Government on July 3, 2020. Based on her empirical survey, she mentioned that 57% of the 248 people who participated in the survey were dog meat eaters.

She admitted that it was the prerogative of the government to formulate regulations to protect the interest of its citizens, but it should be grounded on local factors, not influenced by external bodies like FIAPO and PFA. She further emphasized that there could possibly be no food legislation in the world that was so comprehensive that it covered all species and all type of food in the nation. “Hence to cite FSSAI regulation 2011 by the Government as not permitting the slaughter of dog is unreasonable,” she insisted.

Dr Dolly Kikon summarised by reflecting on the theme of rights in the twenty-first century. In the light of the dog meat debate in India, she cautioned the racist and hostile language of animal rights organizations and activists in India towards indigenous communities. In that context, she urged the audience to ponder upon the contestations between animal rights advocates and indigenous people in India. Drawing from the examples of colonization, racism, and militarization in settler countries like the United States and Australia, Dr Kikon noted how the history of environmental rights as grounded in race and class should force us to reflect on political life of taste, food, and the increasing conflicts and over food cultures in India.

In addition, she called upon indigenous communities to reflect on their responsibilities as consumers while keeping the history of militarization and structural violence.