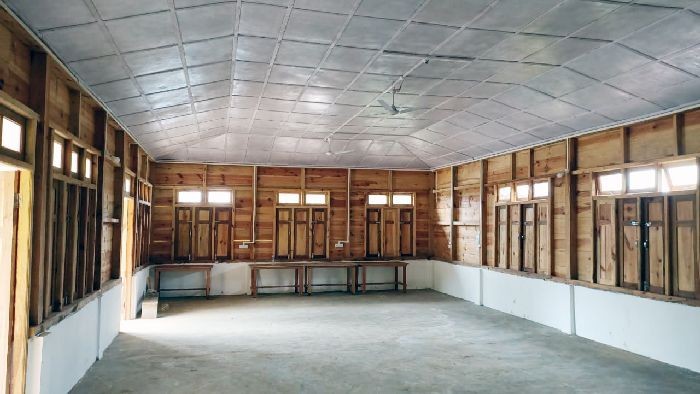 When IAS officer Abhinav Shivam joined his posting at Pungro as the Additional Deputy Commissioner in November 2019, he noticed the absence of bookstores.

“I wanted to build a library the moment I came here,” says Shivam. His search for a space to develop a library eventually led him to the half-constructed building of the Pungro Area College Students' Union (PACSU). Setting up a library had been a long felt dream for the Union too.

“Since Pungro is located in the remotest part of Nagaland, students here do not have access to books and newspapers.

We have very limited resources compared to other parts of Nagaland,” says PACSU President Tokiu Yimchungrü.

With the objective to inculcate the habit of reading among the young and to bridge the knowledge gap, the PACSU and the Administration collaborated to build a library in Pungro. The project which began around April this year is on the verge of completion and is expected to officially open by next month. The conference hall will be converted into a reading hall while one room will be allotted for the storage of books.

“For me, books are quite essential. Education was always high on my mind. It is the most fundamental aspect for any society to move ahead and grow. The first investment should be into the cognitive development,” says the IAS officer who had already begun visiting schools in Pungro by February and make sure that the teachers were present in their schools.

At Pungro, Shivam had also observed that very few people were appearing for competitive exams. The lack of access to quality journals and magazines, according to Shivam, is one reason for the lack of interest. For him, the library is one platform where the students will have access to higher knowledge and ideas.

“If you can give a little cognitive push to a people or community, the evolution of that society begins,” believes Shivam.

Further, Shivam initiated a book donation drive via Facebook and Twitter which received an overwhelming response from various parts of the country. Officers, intellectuals, activists from renowned organisations started donating books, including Indian actress Swara Bhasker who has also taken a pledge to donate 500 books for the library. 150 books have reached Pungro, while 300 more are on the way.

Tokiu Yimchungrü is hopeful that the library will help the young in developing the habit of reading and also prepare them for competitive exams.

Pungro has four private schools and a Government Higher Secondary School. Once the library is setup, the team will be reaching out to the schools to make sure that the authorities allow students to visit the library at least once a week.

“It will help the students to prepare them for the future exams. We are trying to subscribe to monthly magazines and newspapers so that the students can update themselves on the current issues happening outside Pungro. I think it will help students boost their knowledge and confidence,” says Yimchungrü.

The team is also looking for more funds to purchase a computer and a printer for the library. Further, plans are underway to develop an outdoor reading space.

Most importantly, Shivam mentions, “The idea is not to only stop at the library. We want to make it a center for dissemination of information where people can come to know about the employment opportunities.”

With the book drive initiative being carried out, the team has also been able to connect with people and institutions that are willing to provide educational counselling to students via web platforms.

Although Pungro lags behind in various areas, Shivam asserts that if the children are exposed to the habit of reading, and to higher ideas, they might be able to get a better chance in future. “The intellectual status of the people will improve a lot. Apart from anything and before anything, Nagaland needs an Intellectual revolution,” remarks Shivam.

Abhinav Shivam is currently serving as the Deputy Commissioner of Kiphire.