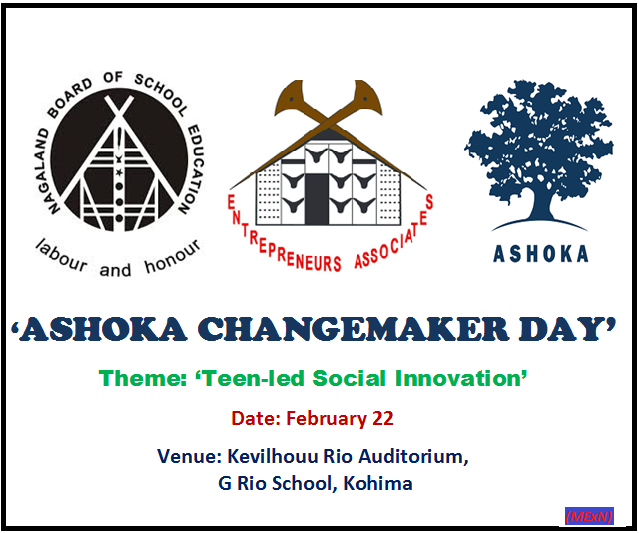 Kohima, February 14 (MExN): With the aim to enable schools to celebrate “Teen-led Social Innovation”, the Nagaland Board of School Education (NBSE) and the Entrepreneurs Associates (EA) are co-hosting the ‘Ashoka Changemaker Day’ on February 22.

Scheduled to be held at the Kevilhouu Rio Auditorium, G Rio School, over 1500 students from Kohima are expected to attend the program.

From early February 2020, Ashoka Changemaker program has been inviting entries for the Idea Pitch Competition encouraging students to innovate solutions for problems they encounter in their life and society. The top 10 entries screened from schools across the state will participate in the ‘Idea Pitch Competition’ and present their suggestions to the jury.

The winner of the competition will win a cash prize of Rs 10,000 and win a spot at the National Level Launchpad program. The second and third winners will also win cash prizes besides being invited for the National program.
The daylong session will include a host of eminent Ashoka Fellows and accomplished personalities as resource persons for a panel discussion to share their thoughts and encourage students to be problem solvers and change agents.

Ashoka Global Fellows Hasina Kharbhih, Founder & Managing Director of Impulse Social Enterprises and Founder, Chair of Board Impulse NGO Network, and Ajit Singh, Founder & CEO, Anant Innovations will be part of the illustrious team. Ashoka Young Changemaker, Disha Shah and Aayush Gupta, Founding Team FamPay will also be present for the event and share their experiences about their journey as young people ushering change in their respective fields.

The Changemakers Day is an initiative of the Washington DC based organization, Ashoka, the largest network of leading Social Entrepreneurs of with over 3,500 fellows present in 92 countries. Founded in 1980, Ashoka’s network of Social Entrepreneurs in South Asia include Nobel Laureates Md Yunus (Grameen Bank) and Kailash Satyarthi (Bachpan Bachao Andolan) and Magsaysay awardees like Anshu Gupta of Goonj among others. Entrepreneurs Associates CEO, Neichute Doulo is also the first Ashoka Fellow from Nagaland, elected in 2000.